Henry Ford, father of auto mass production techniques, would have been proud.

Called a cryostat, the assembly is a sheetmetal vacuum bottle. It surrounds superconducting coils at the heart of electromagnets that will accelerate protons around the main ring for 1-TeV experiments. Some 1,000 magnets are planned for a superconducting ring proposed in the Energy Doubler Project -- a program designed to yield increased useful energy for research while saving electricity and money.

Will Hanson, magnet facility manager, says the one-a-day cryostat production trial confirmed a speculation: that the assembly could be turned out relatively quickly using industrial methods. Jack Jagger, assistant manager, added that the production goal was reached ahead of schedule -- in a relaxed but productive work atmosphere -- and with high morale by 17 crew members. "No panics, other than 'normal' panics," occurred, he said. Jagger noted too that no overtime was required: and that man-hours per cryostat assembled averaged 160, significantly under the 200 figure that had been projected.

The project got underway at 7 a.m. Monday, June 21, in the magnet assembly building. Guiding the handpicked crew in addition to Hanson and Jagger were: Steve Barath, chief technician; Don Tinsley, assistant chief technician; and Jim Humbert, chief inspector; and lead men on day, night and midnight shifts, Wally Medernach, Steve Kovacs and Jesse Mendoza, respectively. Louis Greenwood, expeditor, was also cited for his contributions in making sure that all parts were on-hand when needed. A week of preparation preceded the simulated production run. Small group orientation meetings briefed workers on the how and why.

All operations had been pre-diagrammed in a work flow chart. This workers' "Bible" was co-written by George Biallas, design engineer with Bob Powers, Energy Doubler group consultant. The directions, Jagger said, proved true generally but were modified as needed to improve the assembly process.

Welding was a critical part of the procedure. To fuse the thin stainless steel into a leak-tight system, heliarc welding was specified. A cloud of helium gas acts as a shield for the electric arc. The helium combats impurities and oxidation while providing top integrity welds which withstand the shock of operating from room temperature down to 40° above absolute zero.

An individual "dossier" chronicling the work completed on each magnet traveled with it through shift changes. As production and inspection steps were completed, appropriate personnel initialed and dated the entries in the traveling forms.

Begun on Monday, the first magnet emerged complete on Thursday night -- a day ahead of schedule. Successive magnets were completed at a one-a-day rate.

"The real significance," Hanson said, "was that we proved that completed magnets can be produced by industry and/or ourselves within budget and a tight time schedule." 1979 is the goal for installation of the superconducting ring.

After the work was over, supervisors and crew members held a victory picnic at the Village Barn to celebrate.

A previous simulation, in which coil bundles were fabricated, was successfully conducted in April. 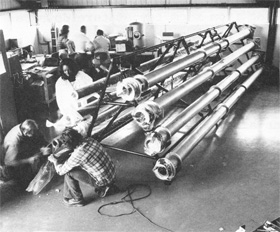 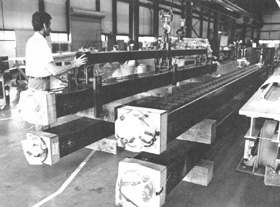 Completed Magnets after Production Exercise (4 of 7) 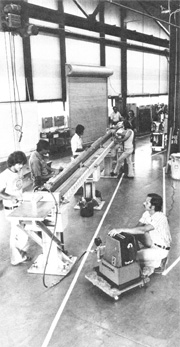 Magnet is inserted into cryostat (5 of 7) 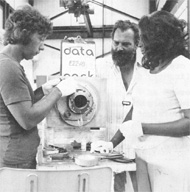