A Brief History of Fermilab 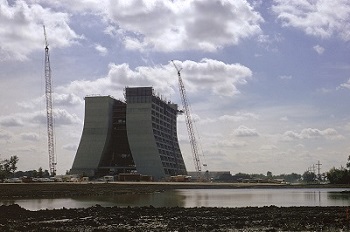 Fermilab’s origin dates back to a 1963 report by a panel of U.S. scientists led by Norman Ramsey, who recommended the construction of a new, powerful proton accelerator, whose construction and operation would be managed by a group of universities. In 1965, Lawrence Radiation Laboratory in Berkeley, California, completed a design study for such an accelerator. That same year, a group of universities formed the Universities Research Association to run the new lab. When the design study neared completion, the Atomic Energy Commission (the predecessor of the U.S. Department of Energy) began a nationwide site competition to select a location for the new accelerator. The AEC chose a 6,800 acre site at Weston, Illinois, on December 7, 1966. Robert Wilson, the energetic director of the Laboratory for Nuclear Studies at Cornell University and a vocal critic of the original Berkeley design study, accepted the directorship of the new lab, originally known simply as the National Accelerator Laboratory (NAL), on February 28, 1967.

On June 15, 1967, Robert Wilson and 17 other employees of NAL, AEC and DUSAF (the architectural and engineering firm responsible for much of the early construction at Fermilab) began their work in Illinois. While the Weston houses were prepared for hosting offices and work space for the new lab, Wilson and his team rented offices on the 10th floor of the Oak Brook Executive Plaza tower in Oak Brook, Illinois. The building was selected for its convenient location between Weston and O’Hare International Airport and gave these pioneers an unobstructed view of the Illinois farmland west of Oak Brook. In January 1968, the NAL staff finished a new design report that laid out the plans for the laboratory. They moved to the Weston site during September 1968, and the lab broke ground for the accelerator on December 1, 1968. The lab was dedicated as Fermi National Accelerator Laboratory on May 11, 1974.

The early lab staff overcame many challenges to complete the Main Ring accelerator ahead of schedule and under budget. The accelerator achieved its design energy of 200 GeV on March 1, 1972, making it the most powerful accelerator in the world at that time and earning Robert Wilson the 1973 National Medal of Science for his contributions to its design and construction. The Main Ring quickly surpassed its initial energy goal, ultimately achieving an energy of 500 GeV in 1976. This accelerator allowed scientists from around the world to perform groundbreaking research at the lab. One of the lab’s major accomplishments during this period was the discovery of the bottom quark in 1977.

Even as the Main Ring was still under construction, Wilson and others at the lab were already setting their sights on the next accelerator. Originally called the Energy Doubler, this would be the world’s first superconducting accelerator. Later, plans for a proton-antiproton collider were added to the design. Under the leadership of the lab’s second director, Leon Lederman, the accelerator, which became known as the Tevatron, was completed and reached a world-record energy of 512 GeV on July 3, 1983. Fermilab physicists Helen Edwards, Richard A. Lundy, J. Richie Orr, and Alvin Tollestrup received the 1989 National Medal of Technology for their key contributions to the design and construction of the Tevatron. The collider experiments CDF and DZero, which observed their first collisions in 1985 and 1992, respectively, announced the discovery of the top quark in 1995. Another Fermilab experiment, DONUT, announced the discovery of the tau neutrino in 2000

Fermilab made additional improvements to its accelerator complex, including replacing the Main Ring, which had functioned as an injector for the Tevatron, with the Main Injector in 1999 and completing the NuMI (Neutrinos at the Main Injector) beam in 2005, which allowed the lab to produce the world’s most intense beam of neutrinos. This NuMI beam positioned Fermilab to become the world’s leader in long baseline neutrino experiments, allowing the lab to host experiments like MINOS (Main Injector Neutrino Oscillation Search), which began operating in 2005, and NOvA (NuMI Off-axis ve Appearance), which began operating in 2013.

Fermilab has hosted or participated in hundreds of experiments during its more than 50-year history, far more than can be described here. These have included cutting-edge experiments in particle astrophysics, like the Sloan Digital Sky Survey, which began making observations in 1998, and the Dark Energy Survey, which took its first pictures in 2012. Fermilab also contributed to the design and construction of the Large Hadron Collider at CERN in Geneva, Switzerland, and Fermilab scientists on CERN’s CMS experiment contributed to the discovery of the Higgs Boson in 2012.

The lab also has a rich cultural life and a site that reflects the aesthetic sensibilities of many of the lab’s current and former employees. Robert Wilson’s vision was to create a lab that embodied both scientific and artistic excellence, which he believed would help draw the world’s best scientists to the lab. He guided the design of the distinctive high-rise Wilson Hall, which houses most of the lab’s offices and was completed in 1973. The site features several sculptures by Wilson, and one of the first employees he hired was artist Angela Gonzales, who designed the lab’s iconic logo and shaped the appearance of the lab, from its buildings to its publications. The lab runs an art gallery and an Arts and Lectures series that are open to the public, and lab life has been enriched by the many clubs and other organizations formed by its staff over the years.

Fermilab has been heavily involved in science education to help develop the science, technology, engineering, and math workforce and to promote scientific literacy. The lab runs programs like Saturday Morning Physics for high school students, which began in 1980, and holds workshops for science teachers, among many other activities. The Lederman Science Education Center, which introduces middle school-aged children to the science done at Fermilab, opened in 1992.

Also integral to the lab’s identity has been its efforts in conservation and restoration of the natural ecosystems that once occupied the site. Wilson preserved many of the oldest trees on the site, and the lab has held annual Arbor Day celebrations since 1969. Wilson brought the first bison to the lab in late 1969, starting a herd that still exists today. The lab began restoring the native tallgrass prairie in 1974, and by the late 1980s Fermilab was home to the largest restored prairie in the world at that time.

This is intended as a brief introduction to Fermilab’s history. For over fifty years, the lab’s mission has brought together people from all over the world to investigate the deepest mysteries of the universe in a unique environment, and there are many interesting and illuminating stories behind that work. You can learn more about all these subjects in the "Historical Information" section of this site.