Cockcroft-Walton’s Successor: A Peep Inside the New RFQ and How it Works 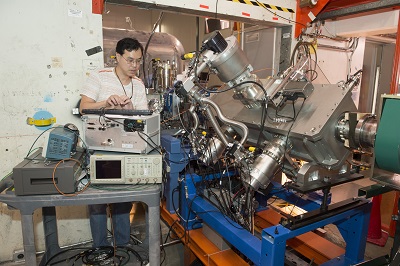 A peep inside the RFQ: Four copper rods sit inside the RFQ. The line down the center reveals the wave structure that both bunches and accelerates beam. Photo: Pat Karns, AD (2 of 2)

In August, Fermilab said good-bye to its iconic Cockcroft-Walton generators. Now the new starting point for Fermilab’s chain of accelerators is in place. It’s called a radio-frequency quadrupole, or RFQ.

Last month, workers moved the laboratory’s new, 3.5-meter-long RFQ to its permanent home between one of the Cockcroft-Walton generators and the front end of Fermilab’s linear particle accelerator, or Linac.

Once in operation, the RFQ, together with its ion source, will act as the birthplace of particle beams for the laboratory’s many experiments.

“The ion source and RFQ are the beginning of everything,” said Cheng-Yang Tan, the lead physicist on the RFQ project. “They are the source of beam for the entire complex.”

The RFQ will accept low-energy beam from an ion source at one end and inject accelerated and bunched beam out the other into the Linac.

It all starts with a piece of pure molybdenum the size of a tea bag, which serves as an electron supply.

To generate low-energy beam, scientists place the molybdenum cathode inside a small container in the ion source machine, which they then fill with hydrogen gas.

“This basically supplies all of the lab’s particles,” said the scientist in charge of the ion source, Dan Bollinger, as he held one of the laboratory’s molybdenum pieces in his hand.

Like shy children who need encouragement to play with others, molybdenum’s electrons need energy to excite them to leave the surface so the hydrogen atoms may collect them. The result is the catalyst for beam: a gas of H-minus atoms – negatively charged ions. With the generation of the ions, beam is born.

The real journey then begins: An “extractor” attracts the negative particles with a positive potential, sucking them through a hole about the width of a cello string while a magnetic field guides them in the right direction. The extractor feeds the beam into the RFQ proper. Once it gets there, it is a continuous stream of particles.

Within the RFQ are four roughly 1-meter-long copper rods arranged so they create a tunnel for the beam to travel through. These rods are the most important component of the entire RFQ, Tan said, since they are directly responsible for focusing, bunching and propelling the beam forward.

Each rod has on its beam-facing surface a collection of ripples that are close together at first and lengthen toward the end of the RFQ. The expanding ripples get beam ready for the Linac by bunching and accelerating the beam from 35 keV to 750 keV.

The RFQ accomplishes transverse focusing, bunching and acceleration of the beam in a single, compact device, one that’s much smaller than the room-sized Cockcroft-Walton.

It will also improve the beam-transfer efficiency, or capture, from the RFQ’s injector line into the drift-tube linac cavity, said Proton Source Department Head Bill Pellico.

“We want to get beam compact before it exits the RFQ, because once it begins to expand, it reduces brightness and dilutes the beam,” Pellico said.

The previous Cockcroft-Walton generators used seven titanium discs 0.4 meters in diameter to accelerate beam, but the bunching was left to another device. As a result, much beam was lost by the time it reached the Linac. By contrast, almost all the beam exiting the RFQ should, in principle, make it into the Linac, Tan said. The new RFQ will be put to the test this month when scientists feed beam into the RFQ and Linac for the first time.