Recently a small meeting gathered in the Village to discuss prospects for colliding beam physics at Fermilab. In these schemes colliding beams would be produced by using a storage ring built adjacent to the Main Ring into which the beam of the Main Accelerator would be injected and stored. At a straight section common to the two rings, the beam in the storage ring and the beam in the Main Accelerator would collide. The total energy available in the center of mass of the colliding particles is almost the sum of the energies of the protons in the two colliding beams. Several alternative modes of operation were discussed at the meeting.

Storage rings are not substitutes for conventional accelerators. Rather colliding beam experiments complement techniques used in conventional accelerators. A storage ring system permits study of reactions that occur in energy regions beyond the present state of the art in particle accelerators, namely the Fermilab machine. Searches for certain particles such as the elusive intermediate boson with predicted masses of 60 BeV require colliding beams at Fermilab energies.

Several different possibilities for storage rings at Fermilab were considered at the meeting in the Village. One of the central topics involved schemes for using the Energy Doubler/Saver. The Fermilab Doubler/Saver will consist of a ring of superconducting magnets installed in the present tunnel of the Main Accelerator. The beam from the present accelerator will be injected into the Doubler/Saver and accelerated to 1000 BeV. The possibility of producing interactions between beams in the Doubler/Saver and beams in the Main Accelerator was one impetus for the meeting.

Arrangements for colliding the beam from the Doubler/Saver with the beam from the accelerator depend on the placement of the magnets in the Main Ring tunnel. The further the Main Accelerator and the Doubler/Saver rings are separated, the more difficult it will be to bring beams from one ring to the other, make them cross, and then get them back in place in the 52 meters of long straight section. This plan could provide collisions of beams up to 400 BeV and 1000 BeV, leading to center of mass values of 1,250 BeV.

A second storage ring proposal suggested the possibility of constructing a "small" 25 BeV storage ring at Fermilab to intersect the Main Accelerator at the long straight section upstream of the RF location (straight section E). This proposal would use conventional magnets and have a ring with the same radius as the present Booster Accelerator. Interactions would occur as the Main Accelerator is ramping, much as the present arrangement with the jet targets at the Internal Target Area.

With the Main Accelerator or the Energy Doubler/Saver operating at 400 BeV, the system would give center of mass energies of 200 BeV. This design has been submitted to the Program Advisory Committee as an experiment for an intermediate boson search by an experimental group consisting of Russ Huson, Phil Livdahl, Rae Stiening, Lee Teng, Frank Turkot, and Jim Walker.

The possibility of matter-antimatter colliding beams was also reviewed at the meeting. An interesting attack suggests a small storage ring that would collect antiprotons produced by first making antiprotons in collisions of the main ring proton with a normal target. A race track-shaped field with ends three meters in radius would be used to accumulate 2 BeV antiprotons produced by the Main Accelerator. These antiprotons would be cooled using a several amp, 1 MeV electron beam. The antiprotons are cooled by the electrons, so that they oscillate less in their swing around the accelerator and more can be fitted into the machine. Designers estimate that perhaps 4 x 107 antiprotons could be stored per cycle until about 101° were accumulated. These antiprotons would be injected back into the Main Accelerator and accelerated backwards simultaneously with "right way" protons. Theories claim that antiproton-proton collisions lead to higher production of intermediate boson particles than do proton-proton collisions.

Storage rings exist at several other research laboratories in the world. Among these are the electron-electron colliding beam facilities at SLAC, the proton-proton facility at CERN, the electron collisions at Novosibirsk, U.S.S.R.. Others are located at the Frascati National Laboratory in Rome, the Orsay Laboratory in France, and in Germany. In the United States, construction of a new set of large intersecting electron storage rings have been approved at SLAC (the PEP project).Brookhaven National Laboratory is proposing to build a set of proton storage rings dubbed ISABELLE. 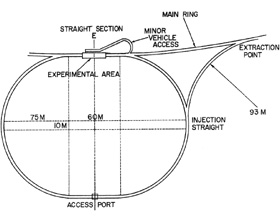 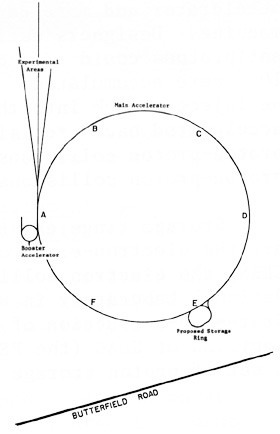 Proposal for storage ring at Fermilab