A major milestone in the development of the Fermilab Energy Doubler was reached at noon on Friday, April 8, 1977. A string of four superconducting magnets was energized for the first time and reached 4,300 amperes, the equivalent of 1,020 BeV beam energy in the eventual Doubler plan. The test demonstrated that these magnets, specially-developed for the Energy Doubler, can be successfully operated in series, an important consideration in building a superconducting accelerator. Designers of superconducting accelerators which use assemblies of multiple superconducting magnets have always been concerned about the protection of such a magnet system in case of the malfunction of one magnet. In these tests it has been demonstrated for the first time that a series connection of magnets can be protected from such a malfunction and that such a system can be operated successfully.

In the projected design of the Doubler, about 780 of these magnets, plus 250 quadrupole magnets, will be installed in a ring directly below the magnets of the present Main Ring. Beam of 100 BeV energy from the present accelerator will be injected into the superconducting ring and accelerated to 1,000 BeV, or "double" the present maximum energy of the Main Ring. The use of superconducting magnets instead of the conventional iron magnets will also make possible a substantial saving in the electrical power required to run the Main Accelerator.

Tests of these multiple magnets are being carried out at "The Awning," a small building on Main Ring Road between service buildings B-0 and B-1. The recent success is the result of almost one year of effort by the Energy Doubler group, the Magnet Facility, and other groups in the Accelerator Division. The major purposes of the tests are threefold (1) to investigate the cryogenic properties of several magnets connected together (called "strings")--that is, to learn how these magnets perform at the -450°F. temperature at which the Doubler will operate; (2) to test the various schemes for protecting the magnets if they undergo transition--called a "quench"--from a superconducting state to a state of normal conductivity; (3) to obtain installation and operating experience with Doubler magnets; (4) to develop hardware and software using the present accelerator control system to monitor the operation of superconducting magnets

A superconducting magnet is made from wire that is much smaller than the copper bus used to make normal magnets. A superconducting magnet can sustain high currents because the wire, when cooled to liquid helium temperatures (-450°F.) by a super-refrigerator, exhibits the property of superconductivity--that is, it has no resistance, and it is not heated by the current going through it. If some part of the wire leaves the superconducting state, which can happen if the current is raised too high, the wire could be burned up, destroying the magnet. To prevent this, a resistor is switched into the energizing circuit to dissipate this magnetic field energy. When this is done, voltages as high as 1,800 volts are generated across the magnet and pressures as high as 100 psi are developed inside the helium vessel.

In the test just completed, the magnets "quenched" at 4,300 amperes. They have since been run to high current and have been quenched numerous times. The fact that the multiple magnet string behaves in a predictable fashion and can withstand quenches gives confidence that a superconducting accelerator is technically feasible. During the operation of the Energy Doubler, a "quench" will be a rare occurrence, but the Fermilab developers must know from the outset that the magnets can recover from quenches quickly and with no damage.

Developers of the Doubler, who work on the edge of a new field of technology, say they have now answered some important questions about their pioneering project: (1) If the quench occurs on one magnet, it does not, in general, start a quench in adjacent magnets; (2) The vessel which carries the liquid helium is able to withstand the high pressures developed during a quench; (3) Magnets can withstand the high voltages generated during a quench; (4) The electrical safety system designed for the Doubler system is sufficient to protect the magnets from self-destruction if the quench occurs; (5) The cryogenic system performs as predicted. It appears that long strings of magnets can be cooled and maintained at liquid helium temperatures.

The next step in the "Awning Test" program is to run the magnets continuously for a month to see if there is any change in their performance. After that, the string will be extended to eight magnets, then to sixteen magnets.

At the conclusion of the tests Friday, Phil Livdahl, Assistant Head of the Doubler Group, commented, "The tests are the most significant in the two years of development work in demonstrating that the whole Doubler can be built and that it will work." Livdahl told the personnel involved in the Doubler work, "When we have this entire test facility working as a unit we'll have gained an enormous amount of confidence in the system. I'm certain that we have the people here that can do it."

Peter Limon, physicist in charge of the test, said, "A project of this scope could not be done without the dedicated work of scores of people at Fermilab. The list is long of such people, but we want to particularly thank the people in the Doubler Group, the Accelerator Controls Group, the Electronics Group, and Mechanical Support Group, the Magnet Facility, and the many others who gave that little extra bit that made this success possible." 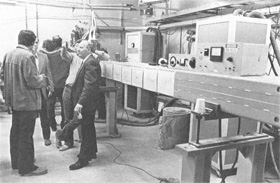 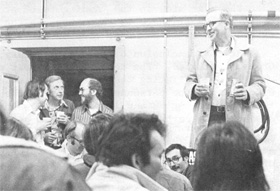 Phil Livdahl congratulates doubler associates on their achievement (2 of 3)