A 15-man crew represented the contractor, Premier Electric Co. of Aurora. And the star performer, the chopper, was supplied by Midwest Helicopter Airways, Inc. of Lyons. Pilot Bob Gaylord did the flying with radio directions from the ground by two other pilots, Jeff Hennard and Bill Kelly. Gaylord had flown in on two earlier days to scout the proposed route of the cable. The day of the event, he arrived early enough to walk the path. Since the rated load of the helicopter is 4,000 lbs., it could not handle a reel of cable. So the approach was to move the reels along the road on carts, unreel some of the cable along the road and move this unreeled cable by helicopter toward the inner ditch.

Looking like a circus-wagon procession was a string of three farm wagons, each mounted with a cable reel boxed-in on the wagon bed. The wagons were pulled by a truck. A tire company truck loaded with spare rubber for the farm wagons stood by.

According to Jan Ryk, Accelerator Division Head Russ Huson and the contractor came up with the helicopter idea simultaneously. Original strategy had been to lay the cable on ice in the cooling ditch and lake--then wait for the ice to melt, dropping the cable under water. The plan went awry when: 1. An early spring thaw melted the ice, and 2. The cable arrived behind schedule from the manufacturer, Phelps Dodge Cable and Wire Co.

Before the helicopter lifted off, the cable was tied to a tractor stationed near D-2 service building. This was done to give the pilot a stationary object to pull against. Pilot Gaylord went up initially for 30 minutes, taking the wires across the cooling pond and the inner ditch to another tractor awaiting on the inside of the ring. After another tie-down, the copter trailed the cable in the inner ditch to the inner lake near the C-4 service building area. Here the protruding pump station had to be encircled by an excursion into the lake. This operation turned out to be rather tricky. The main battle here was fought by two laborers in a row boat on the lake. They tried to tie down the cables while fighting the fierce down draft of the helicopter.

This part of the operation was accomplished by running a tie line to a tractor inside the ring, then the cable was airlifted into the lake and the inner ditch to the C-zero area.

The project was completed in three hours' flying time. "It went very smoothly," Ryk said later. "nobody got hurt. The cables were tested at 55,000 volts after the installation. Even so, there was a little bit of tension during the operation because we had never tried anything like this before and everything was moving quite fast." 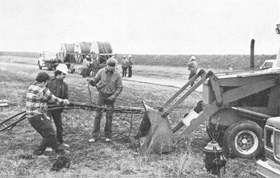 Tying down cable to a tractor before takeoff (1 of 8) 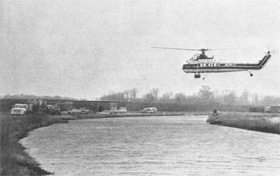 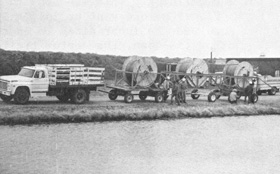 A cable caravan preceded "air drop" by helicopter (3 of 8) 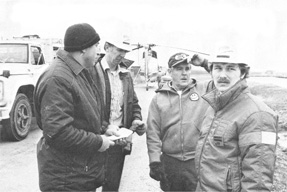 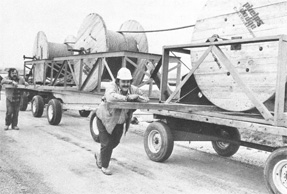