Jan Ryk was skeptical. The project manager on a main ring feeder improvement program had just heard an installation contractor claim he could lay electrical cable at the rate of 5,000 feet a day. Jan became a believer.

The second half of a MR feeder improvement was completed recently. The object of this part of the project was to install additional main ring feeders to service building F3 and E1. Two new tri-cable feeders, with some reconnection of four existing feeders, will increase the capacity and improve the reliability of the western half of the main ring pulsed power system.

Each feeder consists of three cables. A cable is comprised of an aluminum conductor, covered with a layer of insulation rated for 15,000-volt operation. On the outside of the insulation is a helical layer of copper wire which forms the neutral conductor.

Diameter of cable is approximately 1-¼ inches. The total length of the cable installed under this project was about 45,000 feet. The cable arrived at the Laboratory in June, 1977, on nine reels. Each reel contained about 5,000 feet of cable and weighed about 7,500 lbs.

The cable was buried 3 feet underground, along the inside perimeter of the main ring cooling pond. In the operation, a motorized trencher was used to dig a hole 3-½ foot deep and 10" wide. Behind the trencher came a sand dispenser that deposited a six-inch layer of sand in the trench bottom.

Next, cable was laid on the sand bed. Special reel-transport equipment managed the cable reels. "The operation was quite simple," Ryk said. "No cranes were needed for reel handling. The reel-transporter was simply tipped up to accommodate the reel axle and tipped down to pick up the reel.

"A tractor was used to pull the reel-transporter. Since the ground was dry, the reel transporter was pulled along straddling the trench. This made the cable installation a simple operation with a minimum of stress on the cable."

After three cables had been laid in each trench, the sand dispenser put another 6-inch layer of sand on top of the cables. Planks of wolmanized weather treated wood, 1"x 6"x12', were then put on top of the sand followed by back fill. The "sand sandwich" protects the cable against damage by rocks in the soil.

Using the techniques described above it was possible to install a 5,000 ft. stretch of feeder in one 8 hour day--including trenching, cable installation, sand and planks. The back filling took another 8 hour day.

Phase I of the improvement carried out in March consisted of laying three 5,000-foot cables by helicopter along the eastern perimeter in the ring's inner ditch and connecting inner lake. 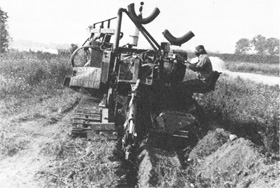 Super-trencher" cuts hole for cable (1 of 3) 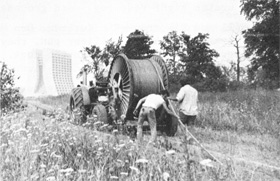 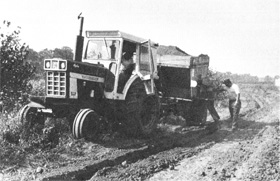 Applying sand overlay before backfill (3 of 3)