HISTORICAL INFORMATION » ACCELERATOR HISTORY » TEVATRON
Historical Content Note: The following material is reprinted from publications from throughout Fermilab's history. It should be read in its original historical context.

Switchyard staffers have marked a milestone-the culmination of two years' work. The event was the first operation of a satellite helium refrigerator in the Switchyard. At the Switchyard, the proton beam from the Main Ring is directed to external target areas.

Project director Jeffrey Appel said, "This refrigerator is especially significant because it is the first satellite built from commercially-produced components. Equally important, elements in the system are common with elements which will be used in the Energy Doubler and Proton Laboratory satellite refrigerators."

He pointed out that the refrigerators supply -450°F cooling. This is required to make magnets in beam lines and the accelerator Main Ring superconducting.

According to Appel, the Switchyard refrigerator was producing reliquefied helium from gas a day after the start of the system's first cooldown. The Switchyard unit is intended for use in bringing 1 TeV (one trillion electron volts) proton beams to the external experimental areas when it becomes available. Its first use will be in a test of two Energy Doubler magnets to be installed in the beam line to the Meson Laboratory. Pending successful testing, the 56 conventional left bend magnets to Meson will be replaced with 22 Energy Doubler magnets.

Appel added, "The smooth beginning of operation was a result not only of the dedicated efforts of those manning the first run, but the careful work of a host of Laboratory employees." Playing key roles in the startup were engineers Richard Andrews, Jerry King, Robert Kolar and Chris Winter of the Switchyard group; Jerry Czop, Michael Hofmann, James Loskot, William Martin and Terry Savedra of Accelerator Mechanical Support Group.

In addition, the success would not have been possible without Alex Waller and Eric Getting, Controls Group; Bob Haring, Mechanical Support Group; Jack McCarthy, Robert "O.B." Oberholtzer and Sharon Lackey of Switchyard; and many others in the procurement, welding and machine shop groups. 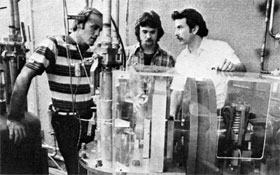 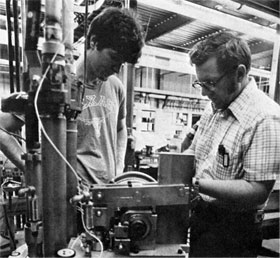