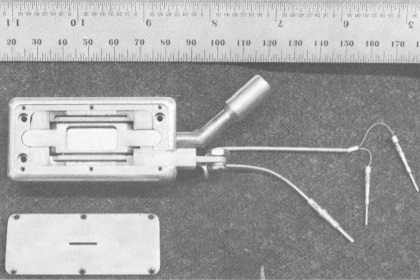 Plasma source showing anode cover with aperture and cathode surface within the anode. (1 of 3) 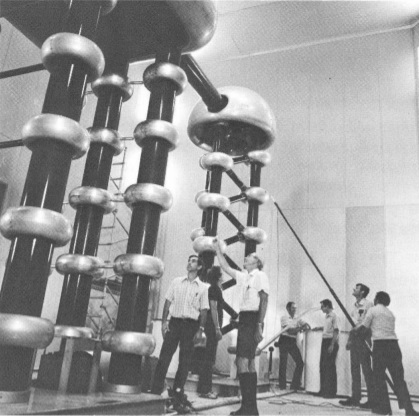 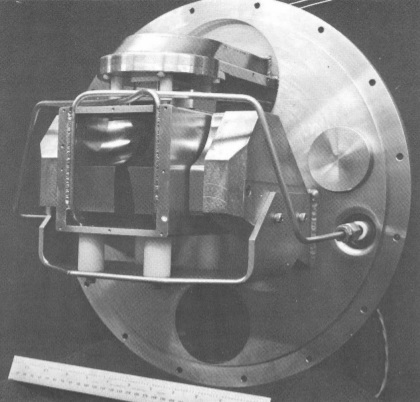 Internal view of ion source assembly. Plasma source is at top beneath mounting assembly. Magnet poles are for focusing the beam and to provide magnetic field for plasma source. (3 of 3)

Fermilab's negative hydrogen source is a technological achievement that has been recognized nationally for its contribution in advancing accelerator science.

It's one of the reasons the operation of the accelerator here has improved in recent times. (See front page article in the July 10, 1980, issue.) These negative hydrogen ions--hydrogen atoms each with an extra electron--are the source of the protons that circulate around the Booster and Main Ring. The two electrons are stripped off each negative hydrogen ion as it is injected into the Booster, thus giving the familiar proton.

"The whole purpose was to increase the efficiency of injection into the Booster," explained Chuck Schmidt, physicist with the Linac Group and one of the key scientists who refined the negative hydrogen source. Others who participated in the development include Russ Huson, head of the Accelerator Division, who encouraged and strongly supported the research; Curt Owen, now with the Booster, who was leader of the Linac Group at the time the source was coming into fruition; and Cy Curtis, physicist with the Linac and presently group leader.

Also, Jim Wendt and Ray Hren, principal technicians with the Linac pre-accelerator (Cockcroft-Walton); Mike Shea, Bob Goodwin and Bob Florian of Controls, and many others who played significant roles.

Not only is the negative hydrogen source developed at Fermilab doing its job here, but other accelerator scientists across the country are adopting or considering the source for their machines, said Schmidt. The Chinese scientists who are studying here will be using it for their accelerator near Beijing (formerly Peking), he added.

"We like the negative hydrogen approach because of the ease and efficiency with which we can inject into the Booster," said Schmidt. "Operationally, it is easier to work with negative hydrogen ions than with the protons we were originally using."

The prototype negative hydrogen source Fermilab had came from the Brookhaven National Laboratory in early 1976. "Through 1976 and early 1977, our people modified the source and made it useful for accelerator use," Schmidt related. "In the summer of 1977, we installed it on a high voltage set in the Village and tested it for a week. With this successful test completed, we moved the source and the high-voltage set to the pre-accelerator area, and put it into operation. The first beam was injected into the Linac in October 1977. In March 1978, we began using the negative hydrogen source for high energy physics."

(Historical note: The Feb. 20, 1976 issue of the Brookhaven Bulletin shows a picture of Curtis accepting the prototype negative hydrogen source from Theo Sluyters of the Brookhaven Accelerator Department. The final paragraph of the article said, "Participating in the tests of the negative ion magnetron source were Cyril Curtis and Charles Schmidt of Fermilab. Their experience with this source at the 400 GeV synchrotron will be of great interest to laboratory researchers and may speed up the application of charge change injection…” How right the author was.)