HISTORICAL INFORMATION » ACCELERATOR HISTORY » LINAC
Historical Content Note: The following material is reprinted from publications from throughout Fermilab's history. It should be read in its original historical context. 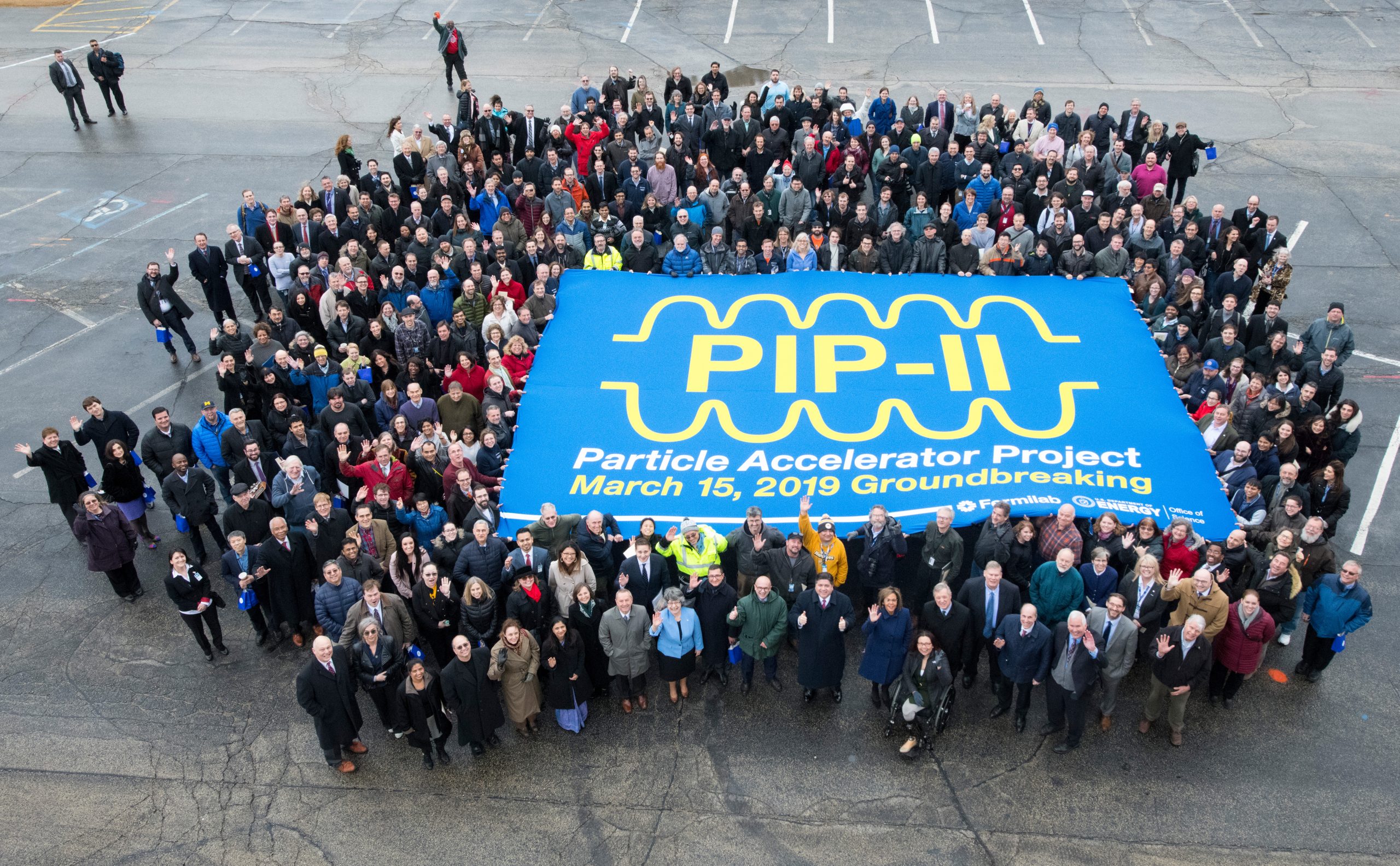 Shortly after breaking ground on the PIP-II accelerator project on Friday, March 15, Fermilab employees were joined by the governor of Illinois, six members of Congress and partners from around the world in this group photo. Photo: Reidar Hahn. (2 of 3) 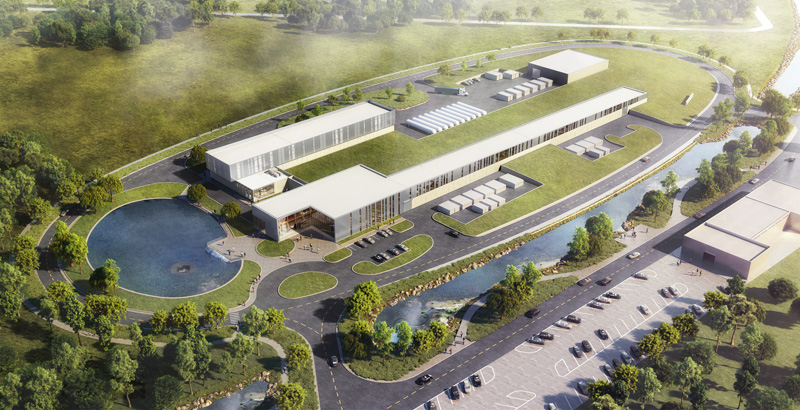 This architectural rendering shows the buildings that will house the new PIP-II accelerators. Credit: Fermilab. (3 of 3)

Editor’s note: Since it was published, this article has been updated with a more recent illustration of the PIP-II campus.

With a ceremony held today, the U.S. Department of Energy’s Fermi National Accelerator Laboratory officially broke ground on a major new particle accelerator project that will power cutting-edge physics experiments for many decades to come.

The new 700-foot-long linear accelerator, part of the laboratory’s Proton Improvement Plan II (PIP-II), will be the first accelerator project built in the United States with significant contributions from international partners. When complete, the new machine will become the heart of the laboratory’s accelerator complex, vastly improving what is already the world’s most powerful particle beam for neutrino experiments and providing for the long-term future of Fermilab’s diverse research program.

The new PIP-II accelerator will make use of the latest superconducting technology, a key research area for Fermilab. Its flexible design will enable it to work as a new first stage for Fermilab’s chain of accelerators, powering both the laboratory’s flagship project — the international Deep Underground Neutrino Experiment (DUNE), hosted by Fermilab — and its extensive suite of on-site particle physics experiments, including searches for new particles and new forces in our universe.

DUNE is under construction now and will be the most advanced experiment in the world studying ghostly, invisible particles called neutrinos. These particles may hold the key to cosmic mysteries that have baffled scientists for decades. The DUNE collaboration brings together more than 1,000 scientists from over 180 institutions in more than 30 countries, all with a single goal: to better understand these elusive particles and what they can tell us about the universe.

The PIP-II accelerator will enable the beam that will send trillions of neutrino particles 800 miles (1,300 kilometers) through the earth to the four-story-high DUNE detector, to be built a mile beneath the surface at the Sanford Underground Research Facility in Lead, South Dakota. With the improved particle beam enabled by PIP-II, scientists will use the DUNE detector to capture the most vivid 3-D images of neutrino interactions ever seen.

PIP-II is itself a groundbreaking scientific instrument, and its construction is pioneering a new paradigm for accelerator projects supported by DOE. The accelerator would not be possible without the contributions and world-leading expertise of partners in France, India, Italy and the UK. Scientists in each country are building components of the accelerator, to be assembled at Fermilab. This will be the first accelerator project in the United States completed using this approach.

With PIP-II at the center of the laboratory’s accelerator complex, Fermilab will remain at the forefront of particle physics research and accelerator science for the foreseeable future.

“The particle accelerator project at Fermilab will provide for new paths of inquiry into fundamental questions about the universe and its makeup. The project builds upon the important relationship between Fermilab and the University of Chicago, creating new opportunities for collaborations between the laboratory, the university and researchers around the world.”

“The PIP-II accelerator project will fuel discovery at Fermilab for decades to come, facilitating new innovations and new insights into our universe. I’m excited for the further cooperation between America’s premier particle physics and accelerator laboratory and its international partners, and the resulting better understanding of the universe.”

“The international contributions and investment made right here in Illinois will keep our state and country at the frontier of science and technology for decades to come. Fermilab’s state-of-the-art accelerator, the top talent they attract and train, and their economic impact bring so much value to the entire state of Illinois.”

“For more than 50 years, Fermilab’s groundbreaking work has strengthened our nation’s infrastructure and contributed to global scientific knowledge. The PIP-II accelerator will keep Fermilab and its work at the forefront of science and as a world-leading destination for research. Continuing to support our national labs like Fermilab is the smartest investment we can make for Illinois, our future and our economy.”

“Fermilab’s Proton Improvement Plan II linear accelerator is a tangible example of Illinois’s commitment to advancing scientific discovery. In addition to connecting local experts with scientists across the globe, this groundbreaking project will help keep our state on the cutting edge of technological innovation—and that’s good for everyone.”

“As a former Fermilab physicist and accelerator designer, I know firsthand this project’s importance for the next generation of discoveries. For decades, Fermilab has led the world in high-energy particle physics research by building and operating high-energy proton accelerators and high-intensity neutrino beams. The PIP-II accelerator will extend that tradition by powering the LBNF/DUNE experiment, Fermilab’s flagship project for the next decade, as well as a broad range of future experiments. I am excited to congratulate my old friends at Fermilab on this milestone, and I welcome the new scientific collaborators who have come from around the world to participate in Fermilab’s new scientific programs.”

“I’m excited to join Fermilab’s staff and scientists for today’s historic groundbreaking. This upgrade will ensure that Fermilab continues to be on the cutting edge of particle physics. The work done at this facility has the potential to revolutionize our world, history and future. I’m glad that Illinois and Fermilab will be part of creating those earth-shaking breakthroughs.”

“Today’s groundbreaking marks an exciting milestone for Fermilab. By investing in upgrades to major research tools, Fermilab will continue to be a leader in research and discovery, drawing physicists and engineers from around the world to the state of Illinois. I look forward to the next wave of Fermilab’s world-class neutrino research that the PIP-II project makes possible.”

“Today’s groundbreaking of the new PIP-II accelerator will advance Fermilab’s innovative research and allow Fermilab to further compete at a global level. As someone who has spent a career in science, I understand how important this new technology is for development and research in STEM education and beyond. Not only will the PIP-II keep Fermilab and its work at the forefront of science, but it will also improve the local economy, which is expected to bring more than $1 billion to the region and generate thousands of new jobs. I’m proud to join my colleagues today to learn more about the work Fermilab is doing and the new PIP-II project.”

“Breaking ground on the PIP-II accelerator today signals the start of a new era at Fermilab, one of new construction, new experiments and new excitement around the laboratory’s research program. I’m pleased and proud to begin this era with the people of this laboratory, and our partners around the world.”

“The PIP-II accelerator is a large science infrastructure that will generate benefits to science, to technology advancement for accelerators and beyond, as well as having impacts on advanced technical training and society. It is a wonderful project and India is pleased to be a major partner.”

“The UK is proud to be a strategic partner in PIP-II through our provision of key accelerator components. The scale of PIP-II reflects the scale of our commitment to promoting scientific discovery and the benefits of innovation that flow from this. We are excited to work with our U.S. and global partners in pursuit of these mutual goals.”

“Italy is proud to partner with Fermilab on its neutrino physics programs and the construction of the PIP-II accelerator. Scientific cooperation between Italy and the U.S. has long been a key driver in shaping the unique relationship between our countries. Given our recent agreements, especially in the field of physics, that cooperation will continue to feed the relationship for many more years to come.”

“In science, like in other fields, international cooperation is crucial for lasting mutual success, innovation and progress. France takes pride in being a leading partner of the PIP-II accelerator project, based on decades of cooperation with Fermilab. French institutions look forward to sharing skills and expertise in superconducting radio-frequency technology.”

“This is a very exciting day for the entire international PIP-II team. We are proud to begin construction of a highly capable, state-of-the-art superconducting radio-frequency accelerator that will serve particle physics for decades to come. Our international partners are essential to the success of PIP-II, and we look forward to engaging in a mutually rewarding adventure.”