A successful test of the prototype of the refrigeration system for the proposed Energy Saver/Doubler at Fermilab was completed last week by the Cryogenics group of the Accelerator Division's Saver/Doubler section. The cold box and engines of one of the "satellite" refrigerators were tested in two of their three modes of operation in preparation for similar use in the early stages of Saver/Doubler operation.

Twenty-four of these units will comprise the cooling facility that will maintain the -450°F. temperature of the Saver/Doubler superconducting magnets. Each of the satellite stations will form an independent module, cooling 43 (1/24th) of the magnets in the new ring, through a pump loop that will start and end at each service building around the accelerator ring.

The same units will also be produced for use with the superconducting magnets to be installed in the beam switchyard to accommodate beams of 500 BeV and higher energy when these become available. Another dozen or so of the refrigeration units may be used in the experimental areas, particularly in the superconducting magnets manufactured for the new Pion Beam line in the Proton Area.

Claus Rode, who heads the Saver/Doubler group that made the successful test, reports on the cryogenic progress, "Our Doubler refrigeration units have been in design and development for several years. We first had to develop a way to pump liquid helium much like water. This has been done during the last three years, mainly using a 400 ft. long loop built in the old protomain. Don Richied and Cryogenic Consultants Engineering Company carried the main responsibility for this work.

"We then turned to studying with the Switchyard Group the effects of the proton beam on a prototype superconducting magnet which was installed in the extracted beam line in the Transfer Hall and in the B-12 service building."

"We have installed a second pump loop which utilizes 2 CTI 1400 helium refrigerators at B-12 for testing a string of magnets in the B-12 service building, where the program is to study the cryogenic aspects of strings of magnets."

The satellite units will combine with the central helium liquefying plant, also under development at the intersection of Roads B and D, adjacent to the Magnet Facility. The next test by the Doubler Cryogenics group will be a trail of the "liquid user" mode in the satellites. This test will simulate the use of about 90 liters of liquid helium per hour in the refrigerators, that would be supplied by the central liquefying plant. The helium vaporizes in the course of its use in the magnets and is returned to the central plant for re-liquefying.

The large capacity of the central plant will give the Saver/Doubler greatly increased efficiency of operation. A former liquid propellant plant acquired by the Laboratory from the GSA excess property listing, this plant formerly supplied oxygen/nitrogen to the missile program in California. The components are being refurbished and the larger part of the plant will be moved to Illinois to serve the Saver/ Doubler project.

Present scheduling calls for the plant to come into operation in the fall of 1977. 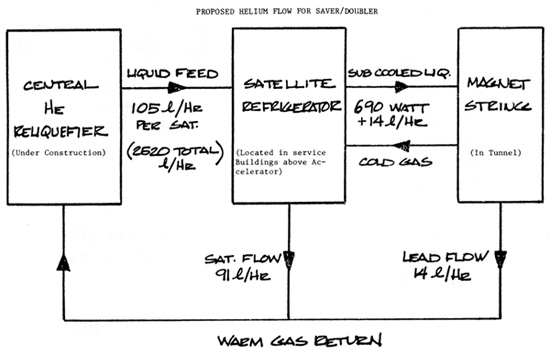 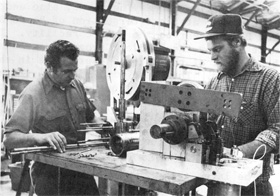 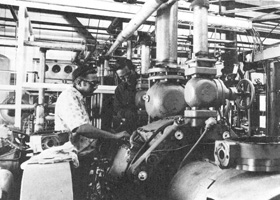 Tony Rader (L), Dick Brazzale at first stage compressor for helium satellite unit in Lab 2 in the Village (3 of 5) 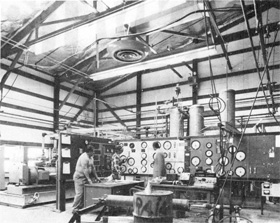 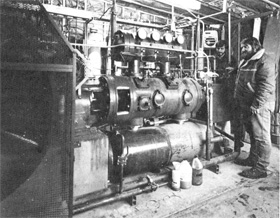