HISTORICAL INFORMATION » ACCELERATOR HISTORY » TEVATRON
Historical Content Note: The following material is reprinted from publications from throughout Fermilab's history. It should be read in its original historical context.

No, it is not a New Yellow Wienermobile 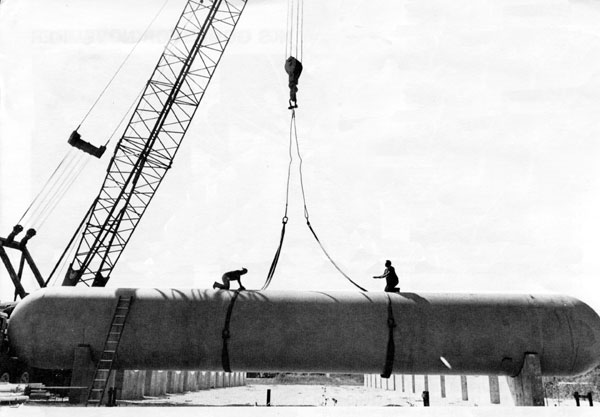 In case you are wondering about the large yellow objects lurking behind the Main Ring shielding berm near the Central Helium Liquefier, they are not Oscar Mayer wieners (although some of Claus Rode's people were apprehended making a stealthy approach along the Main Ring Road in possession of an "Oscar Mayer" stencil). The 13 tanks will store the entire inventory of helium gas for the Energy Saver, the equivalent of 13,000 gallons of liquid helium. The delivery of the tanks after an eventful journey(s) from Texas meant one more major piece had fallen into place in preparation for the next exercise in bringing the Energy Saver into operation.

While the helium tanks are a very visible sign of progress towards the goal of a half-ring test, enormous progress has also been made out of sight in the Main Ring tunnel and the service and refrigerator buildings. Over 60% of the full complement of superconducting dipoles and quadrupoles have been installed in the tunnel and surveyed in place within a few thousandths of an inch. In E and F sectors 4 (of 8) cryoloops, consisting of 40 magnets each, are vacuum tight. The goal is to have all 8 cryoloops in E and F sectors ready to cool down to superconducting temperatures in November.

While much effort and attention focuses on the superconducting magnets, they are only one ingredient in making a superconducting accelerator. A helium transfer line delivers the liquid helium and liquid nitrogen from the Central Helium Liquefier (CHL) to the 24 refrigerator stations around the circumference of the Main Ring; 4-½ miles of transfer line from CHL around the entire ring and back to CHL are now complete and will be delivering liquid helium at 450°F below zero and liquid nitrogen at -330°F before the November target.