Art and artifacts at Fermilab have been enhanced with an ornamental steel arch over Pine Street near Kirk Road. The tri-span sculpture, entitled "Broken Symmetry", tips the scales at about 42,000 pounds-21 tons. It rises 50 feet above the road at its apex.

In his concept, Fermilab Director R.R. Wilson has freely adopted the style of the sculptor Alexander Calder to exemplify the notions of symmetry and symmetry-breaking that are so important in the physics of elementary particles studied at Fermilab.

"The twofold mirror symmetry about the east leg, indicated by the red and the black, is nearly perfect," Dr. Wilson said. "The more basic underlying threefold symmetry is perfect at the base, but deteriorates with height and is completely broken at the top of the arch. However, when viewed from directly above the center, or directly below, the arch again appears to be perfectly symmetrical."

In coming to the concept. Dr. Wilson decided to utilize some steel deck plate from the USS Princeton - as an expression of the "swords into plowshares" use at Fermilab of the thick iron plates of which the battleship had been made. The plates, acquired by Fermilab in 1972, are also used to provide thick absorbers of radiation in the experimental areas.

Located 614 feet east of Kirk Road, the sculpture's legs are bolted to concrete caissons. Each caisson, or concrete "root", is three and one-half feet in diameter and 21 and one-half feet deep. Each element's foot is anchored with eight bolts to a base plate.

The arch was painted on the ground before erection. The west face is flat black; the east face is red.

Element "C", tallest of the trio at 50 feet, is based south of Pine Street. It was erected first with a 10-inch diameter steel pipe connected to its vertical edge. Including pipe and base plate, C weighs 15,500 pounds.

Element "A", based north of Pine Street, was the third element erected. A is 45 feet high; it weighs 13,500 pounds. Element B was welded to Element C before Element A was erected.

The lowest of the elements, B stands 41 feet tall in the Pine Street median strip. B weighs 12,900 pounds. It was also welded at the top to the pipe. Clearance above the road is 32 feet.

Three holes cut in each element are designed to act as wind "spoilers," reducing air current vibrations. A lightning arrester is included.

After the arch was erected and welded at the top, the subcontractor plumbed the structure in its final position and welded elements to base plates. Welds were certified by ultra sonic and magnetic analysis.

Future plans call for the Pine Street gatehouse - 175 feet east of the arch - to be replaced with a modern circular gatehouse designed to harmonize with the arch.

"Battleship" armor from the U.S. Navy aircraft carrier Princeton is incorporated in "Broken Symmetry," Fermilab's newest metal sculpture. The fifth Princeton since 1842, the latest version carried helicopters. Commissioned in 1945, the ship operated in the Atlantic until June, 1946 when she was transferred to the Pacific fleet. Decommissioned in 1949, she was reactivated for combat duty during Korean hostilities. Later Princeton served in Vietnam and in April, 1969, was designated prime recovery ship for Apollo 10-the lunar mission which paved the way for Apollo 11 and the first landing on the moon. She was decommissioned May 20, 1971. 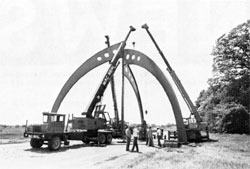 "Broken Symmetry," a new metal sculpture, is erected over Pine Street (1 of 3) 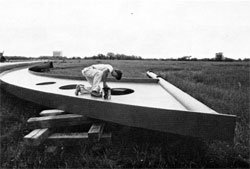 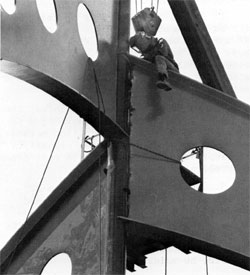