HISTORICAL INFORMATION » ART & ARCHITECTURE » ARCHITECTURE
Historical Content Note: The following material is reprinted from publications from throughout Fermilab's history. It should be read in its original historical context.

The Core in the "Footprint"

When it was established several years ago, NAL was fortunate to find an instant -- although spread-out -- center in DuPage County of Illinois, some 35 miles west of Chicago, for its administrative offices and temporary laboratories. Today, some 600 NAL and DUSAF employees work in what is known as the National Accelerator Laboratory Village -- the former village of Weston -- where men and women can now be found working almost around the clock on the development of what will become the world's largest instrument for basic research. At present, it appears that the NAL Village will serve as a temporary headquarters and research center for the Laboratory for a period of at least two more years. What will happen to the homes in the Village when the staff moves to the permanent site still is under discussion.

It is the present hope of Robert R. Wilson, NAL's director, to begin construction sometime during Fiscal Year 1971, which begins next July l, on what generally is described as "The Core Building" for the Laboratory. The building will be situated, according to present plans, somewhere near the Linear Accelerator Enclosure structure, on the western part of the 6,800-acre site. It will be close to the city of Batavia and close to Kirk Road, the north-south Kane county route which will be extended and improved in the next year or two. Of course, there is considerable planning - architectural, environmental, fiscal, etc. -- to be done before work can be started on the proposed "Core" structure.

The "footprint" site selected for the Core building provides architects with an unusual challenge to place a striking, high-rise structure that will be both aesthetically appealing and functional on an Illinois prairie that overlooks the Fox River Valley. For years to come, the building doubtlessly will be one of the most commanding and hopefully, appealing -- structures in the area.

In November 1969, Dr. Wilson asked DUSAF's chief architect, Thomas Downs, to have the talented architects in the DUSAF joint venture firms try their hands at developing conceptual possibilities for the NAL core building. In Washington, D.C., architect Alan H. Rider went to work on his proposal as a member of the staff of Daniel, Mann, Johnson & Mendenhall, one of the DUSAF joint venture firms. In New York City, architect Martin Stein, of the Office of Max O. Urbahn, began to produce his concepts for a building. Both visited the "footprint" area and discussed with NAL planners proposed functions and needs of the "high-rise." For example, they found that 400,000 feet in floor space is needed to serve all of the presently-anticipated needs; that the building must be impressive, but within certain cost limitation; that it must provide an atmosphere and a spirit for NAL beyond the bland "institutional gray" often associated with major governmental research centers.

Some of the office and other space requirements, as outlined by Francis T. Cole, assistant director for technical affairs at NAL, include about 140,000 square feet of office space; ample space for laboratories and offices for visiting scientists; a computer center; a library; a lobby-reception area; an auditorium that can seat up to 500 persons; a lecture room; eating facilities; film processing; light shops; and miscellaneous needs.

A native of Michigan, "with a deep feeling for the middle-west," Rider is an alumnus of Carnegie Institute of Technology (Pittsburgh, Pa.), class of 1952. He received his master's degree from Cranbrook Academy of Art, near Detroit, in 1953 and also studied in Paris, France, at the L'Ecole de Beaux Arts. For the past four years, Rider has been working on a master plan and designs for a group of buildings at the U.S. Naval Academy at Annapolis, Md. These included the science, engineering, library and auditorium buildings. However, the work that he probably will be best known for among millions of persons is his design of the "eternal flame" gravesite for the late President John F. Kennedy in Arlington Cemetery.

Architect Stein is an alumnus of Pennsylvania State University and is a registered architect in New York. He has been a member of Urbahn's staff since 1963. Among his most notable projects have been the Hall of Science Museum, New York City, where he was the designer-project manager, and the Children's Psychiatric Hospital in New York City's Bronx area. It won the first prize at the New York Architects' Institute of America professional society convention in 1966. Stein was the subject of an article in the New York Times recently for his design of a unique "self-help" project in Appalachia -- a textile assembly shop. Stein resides in New Canaan, Connecticut with his wife and four children, so he has an appreciation of ex-urban life just as members of the NAL family are absorbing.

Architects Stein and Rider communicated with each other only infrequently during the four months on which they worked on their concepts. "We discussed general and functional needs, but wanted each of our proposals to be quite independent," explained Stein.

"I tried to make my building a community," explained Architect Stein. His proposed building is 12 stories high, with senior administrative offices on the seventh floor. There would be six or seven conference rooms throughout the building with easy access to nearby floors so that scientists and administrators can inter-act with ease. Stein's building would run, more or less, East-West in the "footprint" area with an appendage that would serve as an auditorium. There would be a patio for summer walks or eating. For cold weather periods, there would be underground passages linking the Core building with the Linac building.

Architect Rider proposed a twin-tower design 16 stories in height. Each tower would be 200 feet long and about 50 feet in width. The auditorium is on the ground level and eating places would be on the main floor and mezzanine. Rider's building would run roughly North-South in the entrance to the "footprint" area, with a circular-sort of driveway coming off Kirk Road for traffic; a service driveway would be at the eastern edge of the building.

The two architects made their presentations at a seminar in the NAL Curia Wednesday morning, February 25, 1970. In a question period, staff members fired a range of inquiries at them -- ranging from footage measurements, to elevator service, to air conditioning requirements, to office-laboratory space layouts. Generally, Stein & Rider advised that they were offering concepts, not final designs; when the concept of the building is selected, then staff work can be done on specific needs.

The Director's office is seeking comments about the proposed designs. Models of both the Stein & Rider proposals are on exhibit in the Director's complex, just next to the Curia. Employees are invited to drop by to look them over and offer comments preferably in writing). In the next month or two, if NAL is to start work on the Core buildings in the next fiscal year, design concepts must be "frozen". 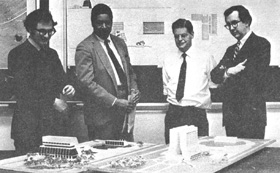 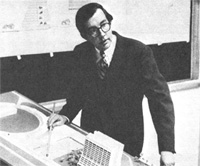 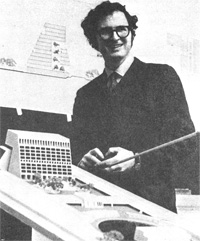