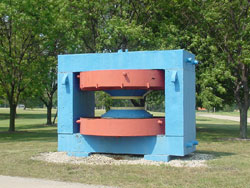 A 55-ton electromagnet from a cyclotron used by Enrico Fermi is Fermilab's latest landmark.

Beside Batavia Road, between Rt. 59 and the Village, is the iron/steel electromagnet from a cyclotron built by William D. Harkins. The physics pioneer built the machine with student help in 1936. Enrico Fermi was among the physicists who used it for neutron-diffusion studies.

The Harkins cyclotron was used later in the Manhattan Project at Chicago. A power crane placed the electromagnet on a reinforced concrete pad.