HISTORICAL INFORMATION » ART & ARCHITECTURE » GEODESIC DOME
Historical Content Note: The following material is reprinted from publications from throughout Fermilab's history. It should be read in its original historical context.

The first NAL project to find a use for discarded empty beverage cans is nearing completion. More than 120,000 cans, collected by, among others, the youth organizations in the Fox River Valley, were used in the effort.

John O'Meara, Technical Services, reported last week that some 120 panels made up of empty beverage cans had been put together by employees at the West Chicago annex for the unique geodesic dome of the Neutrino Laboratory now being built near McChesney and Wilson Roads on the NAL Site.

"The panels have been crated and we are awaiting completion of the steel structure for the Neutrino Building," said O'Meara.

Each panel is an equilateral triangle with a ten-foot side. The panels have been made within one-eighth of an inch dimensional accuracy and have been tested to carry a 2,500-pound sandbag load.

The team working under O'Meara produced six panels per day with about 1,000 cans in each panel. The crew consisted of five male and two female employees, working on a temporary basis for the Laboratory.

O'Meara credited Norman Engler, Technical Services, a temporary employee, with introducing several innovations that sped completion of the geodesic dome effort. One was the automatic pre-portioning and mixing of the epoxy required to bind the cans to the polyester reinforced fiberglass.

In addition, O'Meara said, the Machine Shop helped to expedite the effort by developing a simple "pop can opener" to remove the tops and bottoms of the empty cans simultaneously. The "openers" were developed after Hank Hinterberger, Technical Services Section Head, asked Bill Jones, NAL Central Machine Shop Foreman, for assistance on the problem.

The Machine Shop Staff developed an "opener" which stripped the tops and bottoms of more than 1,000 cans an hour. The cans are hand-loaded into a hopper, a wheel is turned, and a valve is tripped. Then, both ends of the cans are removed at the same time. The can is blown from the machine, minus its top and bottom. It all happens in about 3 or 4 seconds. "It was a marvelous contribution by our machinists," said O'Meara.

The NAL Model Shop, under the direction of Jose Poces, furnished a number of layout fixtures for application of the epoxy.

The panels are both rainproof and fire-retardant. Design of the steel structure which will hold the panels is being directed by DUSAF.

Angela Gonzales, of the Director's Office, coordinated color selection. As a result, the panels will provide generally a red, white and blue effect when they are emplaced.

The development of the geodesic dome roof with empty beverage cans was suggested by Robert Sheldon, Main Ring.

NAL's appeal for thousands of empty beverage cans to produce structural building panels brought a flood of response. Major can producers, local civic organizations, schools and NAL employees joined in the effort to stockpile cans for the unusual NAL construction effort. One can producer offered the Laboratory nearly 100,000 cans; another discussed the possibility of donating 1,500,000 cans to NAL.

Scores of telephone calls were received by NAL from individuals and groups offering cans. One call came from the Melrose Park Public School, where Mrs. Janet Badynski, teacher, had read of NAL's need for cans. In response, NAL sent a truck to the suburban school Feb. 2 to pick up 950 used beverage cans and they were dropped off at the West Chicago site. The 530 students enrolled at the grade school began their collection on a Friday afternoon and by Tuesday had assembled the 950 cans from vacant lots and nearby homes. Bulletin board signs stressed the relevant theme of gathering cans to fight pollution.

"The future of these panels is not limited to geodesic domes," Hinterberger says. "Perhaps many other forms of building materials and building panels could be developed from this unique effort now going on at NAL." 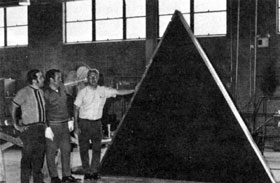 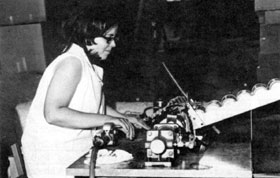 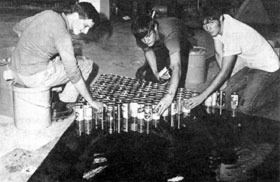