Right on the heels of the workmen completing Phase I of the Central Laboratory high-rise building, came the first NAL employees to move in to the ground floor in the industrial area -- the Controls group of the Accelerator Section.

Deeply and closely involved in producing the control systems for all of the accelerators, and in the Main Ring in particular at the moment, the 19 technicians represent a consolidation of five groups previously associated with the Beam Transfer, Booster, Linac, Main Ring, and R.F. Sections. Under the direction of Bob Daniels, Controls Commissioner, the united group now has space to work, producing the components that will give interface between the accelerators and the computers - the Sigma 2 in the main control room and the Mac 16's interspersed throughout the systems. When they have finished Main Ring modifications and maintenance, they will turn to controls for the neutrino and meson experimental lines.

Working in the midst of the array of electronic equipment that is the mark of their trade -- livened by the spools of colored wire, the soldering irons, and the many, many circuit boards -- the group, under the immediate supervision of Tony Tummillo, is getting the job done in spite of the heavy construction that goes on over their heads.

Phase II of the building construction, now underway, will extend the building upward to the l6th floor and the top out. A tunnel, also completed, connects the high-rise to the Cross Gallery.

A "hats off!" to the Controls group who work under conditions somewhat less than ideal -- sometimes without power and heat; sometimes with water dripping on their desks -- to add their important contribution to the completion of the Laboratory.

Phase II of high rise construction of the Central Laboratory extended the building from its January, 1972 level, above, to the 16 stories shown in the inset. Pedestrians may enter through the low enclosed wooden runway at right, which also leads to the lunch area (1 of 3) 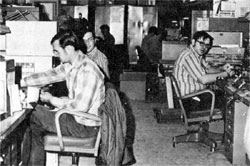 (L to R) Larry Semsch, Ted Ulijasz, Bob Young, R. Mahler, and Karl Schmidt, members of the Controls Group of the Accelerator Section, working on the ground floor of the Central Laboratory building. (2 of 3) 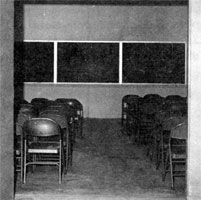 A small meeting room is now in use in the Central Lab Building - for meetings of Operations groups, personnel seminars, etc. (3 of 3)