HISTORICAL INFORMATION » ART & ARCHITECTURE » ANGELA GONZALES
Historical Content Note: The following material is reprinted from publications from throughout Fermilab's history. It should be read in its original historical context.

Angela Gonzales, the artist whose enduring legacy includes the design of the Fermilab logo, passed away on Tuesday. She was 80 years old.

Gonzales, Fermilab ID number 11, joined National Accelerator Laboratory in July 1967 and immediately set out to create a visual identity for the new laboratory. She shared with founding director Robert Wilson a vision of a visually striking lab, one in which bold colors, sculpture and architecture would reflect innovation and creativity.

One of her first projects was to design a logo for the laboratory. The now familiar dipole-quadrupole mark premiered in the National Accelerator Laboratory’s 1968 Design Report and has remained one of the lab’s most recognizable visual elements for almost half a century.

Gonzales developed the 12-color palette that would be used throughout Fermilab grounds, in printed materials and, eventually, in Web publications. NAL Blue, the laboratory’s core color, and various yellows oranges and reds would soon brighten buildings’ exteriors, including houses in the Village, indicating that NAL was a different kind of workplace.

She also created posters for various lab events and and exquisite and artistic covers for scientific reports, including annual reports and conference proceedings.

Gonzales left her mark on smaller projects as well. She coordinated the color selection for the Geodesic Dome, designed by Robert Shelton. She designed and hand-painted four table tops for the cafeteria, and employees continue to gather around three of those tables to this day. She designed and lettered signs for new work spaces in the early days of the computing department. And for the laboratory’s 20th anniversary and the dedication of the Feynman Computing Center in 1988, she designed the event’s poster and a kerchief, which were made into gifts for all the employees.

Gonzales worked at Fermilab for 31 years, until July 1998. It is thanks to her that Fermilab can boast such remarkable surroundings. 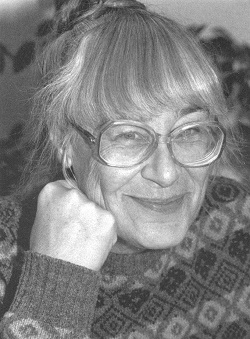 Angela Gonzales’s logo design reflects the evolution of Robert Wilson’s ideas, unifying the various magnets in the Main Ring (2 of 2)