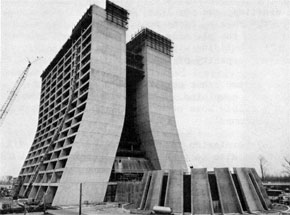 Looking northeast from the Cross Gallery toward the Central LaboratorySidor

A pleasant lounge...carpets...proximity to other sections...you may have thought wistfully of these as you bicycled from the Physics Department to a meeting in the Snake Pit, or slogged to the Cafeteria for lunch in the rain...

All these and more are planned for the sixteen-story Central Laboratory, into which most NAL offices and sections will move in the spring, 1973. No specific moving dates have been set; too many as yet unknown factors are involved, but the interior of the building is being readied for occupancy as quickly as possible, and discussions of locations and space allocations for Laboratory Sections are under way.

The interior of the sixteen-story structure is very open and airy, and to maintain this feeling, the open office concept will be used in any group which can function well in such an arrangement -- with no permanent walls or corridors. Instead, low dividers will provide privacy where desired, particularly around work stations. In this way, commented Donald Getz, "Everyone will be able to stand up from his or her desk and look out a window. Also, we are trying to eliminate the problem of 'inside' and 'outside' offices as status symbols."

It will be a very colorful building. The architect, Alan H. Rider, of the Washington, D. C. office of Daniel-Mann-Johnson and Mendenhall, has suggested accent colors, one for each floor, based upon a scientific progression of color values. Thus, the first floor will be yellow; the second floor, ochre; the third, olive green; the fourth, light green; the fifth, dark green; the sixth, aqua blue; the seventh, light blue; the eighth, dark blue; the ninth, purple; the tenth, light purple; the eleventh, dark red; the twelth, red; the thirteenth, dark orange; the fourteenth, orange; and the fifteenth, yellow again. How much of the accent color will actually be used on each floor is still being decided. Carpeting throughout the office areas will be the same - a neutral brown.

New furnishings are planned for the entire building, and DUSAF is taking bids now for the first phase. Delivery dates will be a large factor in determining moving dates. Commented George Poddy of DUSAF, "We've all worked very closely together - NAL, DUSAF, and the interior design consultants - to make this a functionally and aesthetically coordinated installation. I think it's a very exciting one."

The location of offices in the building is being discussed now and is still subject to change. The floor numbering system is in the European style, with the so-called first floor actually on the second level of the building. Don Getz gave a capsule description of the plans for some of the floors:

The ground floor, which has a high ceiling, will be used as heavy laboratory and shop space. The cafeteria kitchen will also be located there. The main entrance to the building, with a receptionist to greet visitors, will be on the first floor. The cafeteria, perhaps open 24 hours daily if there is a need for it, will be in the south portion of that floor. The west wing will probably contain a model and exhibit center, and possibly, a small stationer's-newspaper stand. The most striking feature of the first floor is the atrium in its center. There you'll be able to sit in or stroll through the garden-like atmosphere and watch the jets passing overhead through the skylight. A Laboratory Operations Center will be located in the east wing.

The roof of the auditorium is accessible from the first floor; in good weather, it will surely prove a pleasant place for gathering. The reflecting pool in its center was included for both economic and aesthetic reasons.

Personnel Services - Personnel, EEO, Public Information, Medical Offices, etc., will occupy both wings of the second floor. A comfortable lounge is planned for the area at the south end which connects the two wings. "One of the problems of a scientific laboratory is communication and cross-fertilization of ideas. A pleasant place to go for coffee and a chat may encourage more of that," commented Don Getz. "CERN has a wonderful coffee lounge, one which we'd like to emulate. Unfortunately, we don't have surroundings to compete with the Alps."

The Library and the Physics Department theorists will be on the third floor, in the south and east wings, respectively. The rest of the third floor space is not allocated yet.

The Director's Office and conference rooms will probably be on the fourth floor, in the south portion overlooking the Cross Gallery. The balance of this floor is still vacant.

Both wings of the fifth floor are given over to money matters - the business office, payroll and accounting, contracting, purchasing, and the legal office.

The AEC will have its offices in a portion of the east wing of the-sixth floor, but the rest of the space has not been assigned yet.

The west half of the seventh and eighth floors will be used for computers for analysis of experimental results, as well as the data link to Argonne. Present plans call for the installation of the 6600 computer, coming from Berkeley in spring, 1973.

Plans for the rest of the building are still too tentative to discuss. One entire floor or equivalent space on two floors, will be occupied by Technical Services - plant operations, modifications, drafting, and the like, but the exact location hasn't been decided. Space for the Physics Department, Research Services and other Laboratory Sections, is still in the planning stages, but "anyone whose work makes it necessary to be in the building will have space available," The building is planned for a maximum capacity of 1200 people.

There is no need to fear that the Village, such an important part of NAL's development, will become a Ghost Town once the Central Laboratory is completed. Some of its buildings, those north of Neuqua, the Director's Complex, and possibly some others, will continue to be used as laboratory space for visitors and some NAL personnel.

In addition, the Laboratory has asked the AEC for permission to spend some of the $250 million authorized for construction and development of the site to convert some of the houses back into quarters for short-term visitors to the site.

All in all, it should be an exciting Spring around NAL!