The Last Bucket of Cement Goes Up

In the old country - Sweden, that is - they used a cedar tree, the symbol of" strength, but Corbetta Construction Company, the firm building Phase II of the Central Laboratory, chose instead an American flag for the traditional "topping out" ceremony which signified that the last bucket of cement had been poured into the top of the sixteenth floor of the building.

The ceremony, which took place shortly after 3:30 p.m. on Thursday, April 5, 1973 was attended by only a handful of hardy souls who were brave enough to climb the ladders which led up the last windy 30 feet to the top of the roof. Among others, they included NAL Director Robert R. Wilson, DUSAF Project Manager E. Parke Rohrer, and Corbetta Construction Company job superintendent Kenneth Monson. The flag located on the East Tower of the building, rises 10 feet above the 240-foot structure. It will remain there until NAL officially takes over the building from Corbetta later this year.

According to John Schroeder, Mechanical Coordinator for Corbetta, there are about 27,000 yards of concrete in the building. He estimates that only about 2000 more yards will be needed to complete the main entrance and some other portions of the lower levels.

After the formalities, the men returned to the first floor of the building, where Corbetta Company officials hosted an informal champagne party. In congratulating the crews. Dr. Wilson remarked, "We of NAL hope to make a major contribution to our country's knowledge here. This fine building will constantly remind us of the contribution you have made." 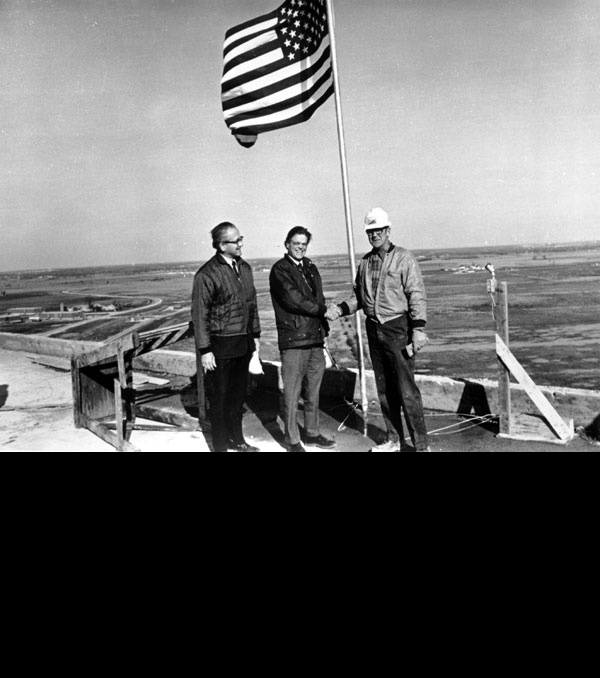 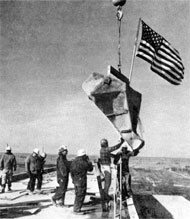 The last bucket of cement is guided into place by the Corbetta Construction Company crew. Crane operator on the ground receives his instructions via the radio held by the man second from left (2 of 3) 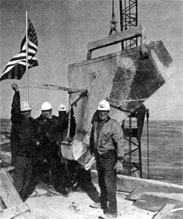 NAL Director Robert R. Wilson (L) lends a hand at the final stages of the operation. DUSAF Project Manager E. Parke Rohrer (center) and Corbetta Job Superintendent Kenneth Monson are with him (3 of 3)