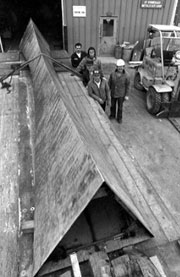 The finished Obelisk being moved from the warehouse, about to begin its journey to its resting spot

A new metal sculpture by Fermilab Director R. R. Wilson was erected in May, 1978 in the reflecting pond in front of the Central Laboratory.

It is a hyperbolic obelisk named "Acqua Alle Funi," which is a familiar Italian expression (also used as a rallying cry by some of the constructors of the Fermilab accelerator during the desperate moments that preceded its successful operation in 1972.)

The obelisk at Fermilab stands 32 feet high including its four-foot base. The work is fabricated of three gleaming stainless steel plates, each 1/4 inch in thickness. Each plate is made up of twenty-three smaller plates which were edge-welded together by Wilson.

The three hyperbolically-shaped plates were then welded together at the edges to form the three-sided hyperbolic obelisk. The surface was ground by hand to remove the mill-scale and a textured finish of overlapping circles was produced using very coarse sanding disks, which left deep grooves that catch the light from all directions. The effect of the light varies with weather and atmospheric conditions.

Dr. Wilson worked on the sculpture before and after working hours, at lunch-time and on weekends from January, 1978. Toolmaker Charles Matthews of the Machine Shop assisted him. In order to learn to weld, Wilson apprenticed himself to Masterwelder James Forester of the Machine Shop who put Wilson through a course of instruction in the art of welding.

After a certain amount of "learning on the job," Dr. Wilson then did nearly all of the welding and much of the finishing work personally in the Cut Shop at 27 Winnebago in the Village.

The base was installed on May 5; the sculpture erection took place on May 9. Both pieces were hauled from the Village by flat bed truck and lifted into place by crane.

Dr. Wilson studied sculpture in Italy at the Academia Belle Arti in Rome in 1961. He had two showings of his works in Ithaca, New York where he served as director of Cornell University's Laboratory of Nuclear Studies before founding Fermilab in 1967. Dr. Wilson was commissioned to create a large sculpture for the Institute for Advanced Studies at Princeton, N. J. and another for Ithaca's Festival Theater.

'Acqua alle funi' refers to an incident that occurred in the piazza (square) of St. Peter's cathedral in the 16th century when the large Egyptian obelisk was being raised in the piazza. Dr. Wilson recounts the historical episode:

"Nearly 1,000 men and hundreds of horses were pulling on thick ropes attached to the obelisk in order to raise it to the vertical. Thousands of dignitaries and citizens of Rome were assembled to watch the erection, but were restrained to silence by penalty of death so that the commands of the chief erector, Domenico Fontana could be heard. By noon the obelisk had been raised to 45°, but the midday sun so heated the ropes that they began to lengthen and to slide on the capstans.

"The obelisk began to sag inelegantly toward the earth. Despite the harsh commands of Fontana, nothing would avail. At this critical point an old Genoese sailor, Bresca di Bordighera, could restrain himself no longer and shouted out 'Acqua alle funi' -- 'water to the ropes!' Instead of executing Bresca, Fontana commanded the erectors to throw water on the ropes. This caused the ropes to contract, to stick to the capstans, and the erection to the vertical preceded without further incident.

"Bresca was rewarded and made a nobleman of the Vatican for putting himself in jeopardy. His decendants still have the privilege of selling palms to the faithful at the Vatican on Palm Sunday."