HISTORICAL INFORMATION » ART & ARCHITECTURE » ART GALLERY
Historical Content Note: The following material is reprinted from publications from throughout Fermilab's history. It should be read in its original historical context. 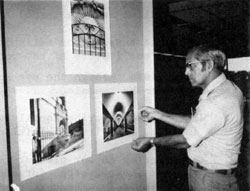 Professor Harold Allen preparing exhibition of his work at Fermilab

The first exhibition of art photography at Fermilab opened in August, 1975 in the second floor lounge of the Central Laboratory. Entitled "Two Chicago Photographers," the show displays the works of Harold Allen and Ellen Fine. The show continued through September 12th. The Fermilab community and the public to viewed the exhibition during the regular working hours of the Laboratory.

Harold Allen, a native of Portland, Oregon, attended the School of The Art Institute and the School of Design in Chicago. While serving in the Air Force in Europe as a photographer he became interested in architectural photography.

Except for a six-year period when he did research in the history of architecture for the Sinclair Refining Company, he taught at the School of The Art Institute from 1948. And was named Frederick Latimer Wells Professor there in 1971.

Allen's exhibitions have included his 100-print show, "Old Buildings of Nauvoo (Illinois)" which appeared at several museums and universities. A 30-print show by Allen, "Buildings in Illinois," was circulated extensively by the Illinois Arts Council. His book, "Father Ravalli's Missions," was published in 1972. His works are found in the collection of The Art Institute of Chicago, at The Metropolitan Museum of Art, and in the picture archives of the Library of Congress.

Ellen Fine, at one time a student of Harold Allen at the School of The Art Institute of Chicago, portrays photographically the widely different environments she encountered as the child of a Navy family. She also studied at the California College of Arts and Crafts and at San Diego State College.

Fine taught photography at Morton High School and Morton College in Cicero, Illinois. She also taught at the summer workshop at the Winona School of Photography, Winona, Indiana. She was a reviewer for The Professional Photographers of America. Her showings have been represented at Northwestern University, Linfield College, the University of Wisconsin, and Eastern Washington State University.

The works of the two artists display the contrasts between the documentary possibilities which Allen captures in his renderings of unusual architecture and the form and designs which Fine filters through her camera.

Dr. Leon Lederman of Columbia University, an experimenter at Fermilab who has assisted with the arrangements for the Allen-Fine exhibition, comments in the program, "Physics is the science of observation, and probably no art form is closer to the metier of the practitioner than is photography.

"How parallel are the tasks!"

"Blend respect for meticulous technique with inspiration in order to expose a small piece of the world."

"Explain through the eye and the mind how a thing subtle but of great wonder can be revealed."

"We can thus describe equally well the discovery of the psi particle or one of the prints in this, the first exhibition of art photography at Fermilab."

"The offering is for pleasure and profit. The joy to the eye is obvious. The profit comes from the ansatz, often forgotten, that also in physics, attention to esthetics has played a pivotal role. By this reminder of the essential unity of our fascinations, we may even do better science."