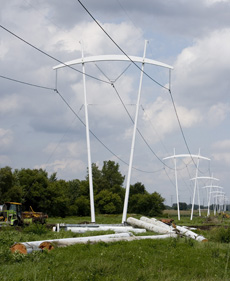 Steel pi poles take the place of wooden ones. FESS plans to use the wood for other projects.

Stretching north from Wilson Hall, 18 new steel poles gleam against the skyline, ready to carry the electricity needed to run the world's highest-energy accelerator. The power poles, shaped like the physics symbol π, represent Fermilab's commitment to modern science and to the surrounding communities.

The city of Batavia paid for the $4 million power-line project, as part of an agreement that lets the city run its high-voltage power lines through Fermilab property. That helped the city avoid placing new power lines near residential areas.

The laboratory received new circuit breakers installed at the north end of the lines. They give the laboratory the ability to turn off power to certain experiments without having to first contact Commonwealth Edison, FESS's Steve Krstulovich said.

Wires and cables stretch across the new metal poles. On Sept. 29, the lines will crackle with energy.

"We are as close as you can possibly get to the original design," Krstulovich said.

In his quest to mix architecture and art, Wilson had the original poles specially hand crafted so that the wood curved into the top of the pi shape, a difficult task before the advent of metal electrical poles.

The original poles lasted for nearly 40 years. Although FESS will take them down, the poles will not disappear from Fermilab. FESS plans to give the old wood new life. The original 15-foot cross arms could add flair and history to future construction projects such as picnic shelters and foot bridges, according to Randy Ortgiesen, FESS department head.

As for the steel poles, Krstulovich says "the new ones will last at least a century."