The 16-story Central Laboratory, the most prominent landmark on the 6,800-acre site, will be named Robert Rathbun Wilson Hall in honor of Fermilab's first director.

The ceremony will begin at 4 p.m. on Sept. 18 at the north end of the building, its main entrance. All Fermilab employees, users and their families are invited.

Speaking during the program will be Norman Ramsey, president of Universities Research Association; Harry Woolf, chairman of the URA Board of Trustees; a representative of the Department of Energy; Robert Wilson and Leon Lederman, Fermilab director.

The new name of the building will be formalized by letters attached to the building's surface on the west side of the main (north) entrance.

The URA board at its March 20-21 meeting approved the Laboratory's request to name the building Robert Rathbun Wilson Hall. The DOE also has approved the new name. R. Wilson and his wife, Jane, will be the honored guests at the trustees' dinner that evening (Sept. 18).

Wilson, who holds the title of Director-Emeritus, served as director from 1967 until he left in 1978. He presently is on the faculty of Columbia University.

He also is recognized as an accomplished artist-sculptor and an articulate spokesman promoting the important parallels between aesthetics and science.

Dr . Wilson personally suggested designs and supervised construction of all Fermilab facilities. The design of the twin-towered Central Laboratory Building was patterned by Dr. Wilson after a cathedral at Chartres, France. 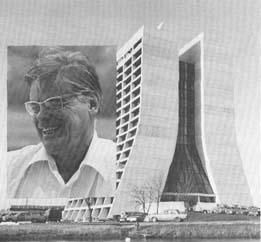 Robert Wilson and Wilson Hall (1 of 2) 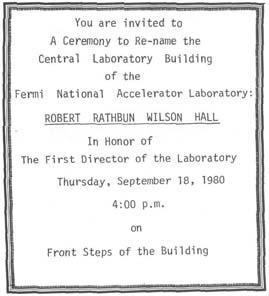 The Invitation to the Re-naming (2 of 2)