HISTORICAL INFORMATION » ART & ARCHITECTURE » GEODESIC DOME
Historical Content Note: The following material is reprinted from publications from throughout Fermilab's history. It should be read in its original historical context.

An appeal for literally thousands of empty beverage cans -- for a construction research effort -- has been made by Hank Hinterberger, NAL Technical Services, and Robert Sheldon, Main Ring.

"The use of garbage to some beneficial end is being given nation-wide consideration," said Hinterberger. "We, at NAL, have concluded that there is a possibility that pollution from cans strewn throughout the countryside might be profitably exploited in the architectural development of a portion of the Laboratory."

Hinterberger explained that used beverage cans might be employed for the production of structural building panels. For instance, he said, the empty cans are being tried in the production of panels for the geodesic dome being planned for NAL's Bubble Chamber building.

The dome consists of a light structural frame which is to be clad with these panels. Each panel is an equilateral triangle with a ten-foot side.

When the used cans are received at NAL, their tops and bottoms are removed to permit the transmission of light through them from each end. They then are assembled into panels by bonding a glass-reinforced fiber plastic sheet, top and bottom, to form a sandwich some five inches thick in a sort of honey-comb structure.

Experimental panels constructed in this fashion, as shown in the photograph, have proved to be extremely stiff, thus enabling the structure to withstand both wind and snow loads. Furthermore, the panels are inexpensive in that the core material is the used cans, which can be obtained either free of charge or for very small cost.

Hinterberger stressed that the beverage can design was "an invention of Bob Sheldon's." Sheldon has filed a patent disclosure statement regarding the unique design with NAL. Fabrication of the design is being carried out jointly by Hinterberger and Sheldon.

Hinterberger is asking NAL and DUSAF employees to save their beverage cans and to place them in the receptacles provided for their collection near each soft drink vending machine on the NAL site. In addition, he also is asking employees and friends of the Laboratory to bring in any empty beverage cans that they might have for disposal at home.

"The future of these panels is not limited to geodesic domes," Hinterberger says. "Perhaps many other forms of building materials and building panels may be developed from this unique effort now going on at NAL."

With Sheldon, Hinterberger also has enlisted the assistance of Bernie Lensmeyer, Food Service Manager, in collecting the empty cans for use in the NAL-related project.

There are many advantages to a project of this sort -- the cost is extremely low since the main component is normally scrapped; from an ecological point of view, the use of discarded cans will help remove them from the environment. But, the most important advantage is that these panels are easily handled, very sturdy and many patterns can be achieved for a variety of constructional purposes.

A large waste can has been placed near the pop machine in the cafeteria into which employees are urged to toss their empty soft drink cans.

The receptacle is appropriately marked - EMPTY POP CANS ONLY - please discard your other trash elsewhere!

So remember: when you're taking the pause that refreshes, sipping the un-cola, or making Milwaukee more famous... you may be contributing to a challenging endeavor at NAL. Bottoms up!! 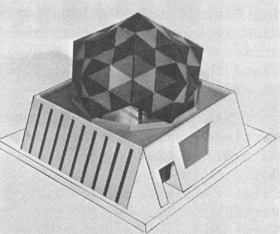