HISTORICAL INFORMATION » HUMAN RIGHTS, DIVERSITY AND INCLUSION
Historical Content Note: The following material is reprinted from publications from throughout Fermilab's history. It should be read in its original historical context.

Looking Back: Fermilab in the Civil Rights Era

Twelve years after nine African-American students were escorted to Little Rock Central High School under the protection of the 101st Airborne Division and the aegis of Brown v. Board of Education, 22 young African-American men from Chicago flew to Oak Ridge, Tennessee.

Recruited from inner-city Chicago as a joint effort between the Atomic Energy Commission (AEC) and the U.S. Department of Labor, the men joined a special Training and Technology program to prepare them for jobs at the National Accelerator Laboratory. For four to six months, they were trained to become welders, machinists, electronics technicians, draftsmen or mechanical technicians. At the end of their training, they were flown back to Chicago, where jobs at the NAL — today known as Fermilab — were waiting for them.

From 1969 to 1974, the Training and Technology program provided training and skilled jobs to dozens of minority workers each year as part of the NAL effort to meet civil rights goals. Edwin Goldwasser, then deputy director of the laboratory, explained the stance in a 1969 article published in the Bulletin of Atomic Scientists:

Scientists are restless in these days of social strife. As a group, they tend to be concerned humanitarians. They believe in the intrinsically human value of basic research, yet they are repeatedly confronted by its military applications. At the same time, they find their science to be relatively dissociated from major social problems. … At the National Accelerator Laboratory, we have found it possible to pursue scientific objectives, and at the same time, to be more than mere spectators of the crises which grip our society.

On Fermilab’s 50th anniversary, we take a look back at its connections to the civil rights movement using archives and original interviews.

Fermilab today can trace its origins back to a contentious, multimillion dollar accelerator project known in the mid ‘60s as the 200 GeV project.

Initial proposals to host the project came from hundreds of locations across the country — it was in extremely high demand. Eventually, the list of potential sites was whittled down to a few finalists, including existing national labs in New York and California, as well as the small town of Weston, Illinois.

It was almost not to be. In 1966, after Weston was selected as a finalist, pressure mounted against it: Illinois was the only one of the finalist states that lacked fair housing legislation to protect minorities. But the other advantages that Weston provided, such as proximity to urban centers and low construction costs, superseded the AEC’s concerns about civil rights. In December 1966, Weston was chosen to be the location for the 200 GeV project, pending funding approval. Only days later, the Illinois state legislature voted against fair housing legislation.

Tensions continued to mount as the 200 GeV project faced funding authorization hearings. NAACP representative Clarence Mitchell spoke at the hearings, saying that the choice of Weston was an “example of how human dignity and fair play get short shrift from some top government agencies.”

Senator Joseph Pastore, chairman of the Joint Committee on Atomic Energy, spoke out against appropriation of funds to the project, saying “In the name of advancing science and technology, we should not be guilty of retreating from our boasted principles of equity, equality and humility.”

These arguments played out on the political backdrop of the time. Civil rights and antiwar protests ionized the 200 GeV project and turned it into a lightning rod for criticism. Additionally, prominent physics communities at Berkeley and Brookhaven laboratories both balked at sending the frontiers of high-energy physics to what they felt was a desolate Midwest full of cornfields and little else.

In June 1967, the NAACP organized a protest that would march from nearby Warrenville to the Weston Village. In an effort to ease tensions Robert Wilson, director of the newly established National Accelerator Laboratory, sent Martin Luther King Jr. a telegram, writing that the scientists “strongly support the struggle for open housing in Illinois. Science has always progressed only through the free contribution of people of all races and creeds.” It is not known if King, who stopped by briefly, ever responded, but the protest proceeded peacefully.

However, in July, Weston managed to secure the funding for the 200 GeV project over the protestations of its critics.

As Wilson and Goldwasser planned the growing laboratory, issues of race and inequality were central to their thinking, and they spent a significant portion of their time discussing affirmative action. Among the first actions they took was the creation of a human rights policy that laid out the axiom: “It will be the policy of the National Accelerator Laboratory to seek the achievement of its scientific goals within a framework of equal employment opportunity and of a deep dedication to the fundamental tenets of human rights and dignity.”

In light of these efforts, Mitchell, who had previously been against NAL, changed his stance to one of support and wrote favorably in support of the lab when it later struggled to get funding.

By the end of the year, fair housing became the law of the land with the passage of the Civil Rights Act of 1968. It was supported by Senate Minority Leader Everett Dirksen (R-IL), who many suspected treated the bill more favorably because of the choice of Illinois for the 200 GeV project.

One of the crucial early hires Goldwasser and Wilson made for the young laboratory was that of Kennard Williams. As the NAL equal opportunity and community relations officer, Williams was instrumental in organizing minority outreach initiatives, such as hiring minority contractors to do construction work.

In 1969, about 40 percent of small contracts (those below $10,000) for the Fermilab Village were awarded to African-American contractors. These rates were unusual for the time period, during which less than 1 percent of all government funding for contracts went to minorities, including women.

Williams was also involved with outreach and training programs, including NAL’s Technology and Training (TAT) program. In order to increase diversity at NAL and offer opportunities to minorities — particularly African-Americans — TAT facilitated the recruitment and training of dozens of local minorities every year it ran. NAL trainees were flown to Oak Ridge National Laboratory and instructed in the skills they would need for their jobs back in Illinois.

Although it ended after only five years, TAT served as a model for future minority training programs at the lab.

The first set of TAT trainees, a group of African-American men from inner-city Chicago, stayed in military dormitories that were relics from World War II during their months at Oak Ridge. They lived and studied there together, and were instructed in math, science and technical skills for their assigned vocation.

At that time, all of the instructors were white, according to Halbert Landers, a member of the first TAT program, and a longtime lab employee.

“That was a sad thing,” he said. “But [it] didn’t cause a problem because all of our instructors went far and beyond the call of duty.”

Although the TAT program was comprehensive and rigorous, it did not teach trainees everything, according to Landers.

“The one area that I wish I would’ve learned down at the TAT program was how to read a slide rule,” he said. “When I came back from the TAT program there weren’t really any computers — we had to do all the mathematics by hand, or as a lot of the engineers did, use a slide rule.”

During the months that the trainees spent in Oak Ridge, they also grew close and became friends.

“We kinda made a pact between us that when we got on the plane, that whatever differences we had … we weren’t gonna bring them down there to Oak Ridge,” Landers said. “Even when we came back to Fermilab, we were one, as it were.”

Fermilab technical supervisor Curtis Danner, who was recruited to NAL out of a vocational school in 1970, recalled that this camaraderie transferred to other African-American members of Fermilab, who frequently supported one another and “treated each other as family.”

The lab, too, gave institutional backing to many of its employees. Early on, Landers had difficulty finding housing in the area around the lab and was told that there were no vacancies. Landers checked with the lab’s personnel department, who sent a white employee to inquire about housing availability in the same location. That employee told that housing was, in fact, available. After pressure from the lab, Landers was able to get an apartment.

Inclusive views were not shared by all members of the lab, which Landers discovered only when he was invited to dinner by his supervisor. Over the course of the meal, Landers’ supervisor revealed that he campaigned for George Wallace and “didn’t feel that black people needed to have a leader speaking for them because white folks didn’t.”

The TAT program gave minorities a foot into the door at the lab, but it was not the same as a full education. When the lab began hiring staff with associates and bachelor’s degrees, most of whom were white men, TAT graduates like Landers had trouble advancing.

“They brought them in, had higher pay, better responsibilities and also would try to put them in charge of the minorities,” he said.

Still, many African-American employees and TAT alumni such as Landers and Danner persisted and were eventually recognized as valuable members of the Fermilab community.

“As a whole we were all treated fairly,” Danner said. “Everything was not perfect because we don’t live in a perfect world, but I had no real complaints, and I’m still here after all those years.”

In 1981, on the 12th anniversary of the TAT program, trainees of the first TAT program issued the following statement.

We the trainees from the first training program (TAT, begun Feb. 9, 1969) would like to take this time to express our thanks to those who helped to make it possible for our group to become productive and worthwhile citizens.

Having come out of an environment that was not scientific or technically oriented, we have found that given the opportunity and guidance to achieve it can be done. We have found that prejudice is not environmental but rather an individual thing and need not exist where people truly have an understanding of themselves in relation to their environment. We have learned, in more ways than one, what it means to be a worthwhile and productive citizen within the framework of our jobs and our communities.

Editor’s note: Readers interested in learning more about Fermilab’s history as it pertains to civil rights should look to pages 79–89 and pages 104–108 of the book Fermilab: Physics, the Frontier, and Megascience. 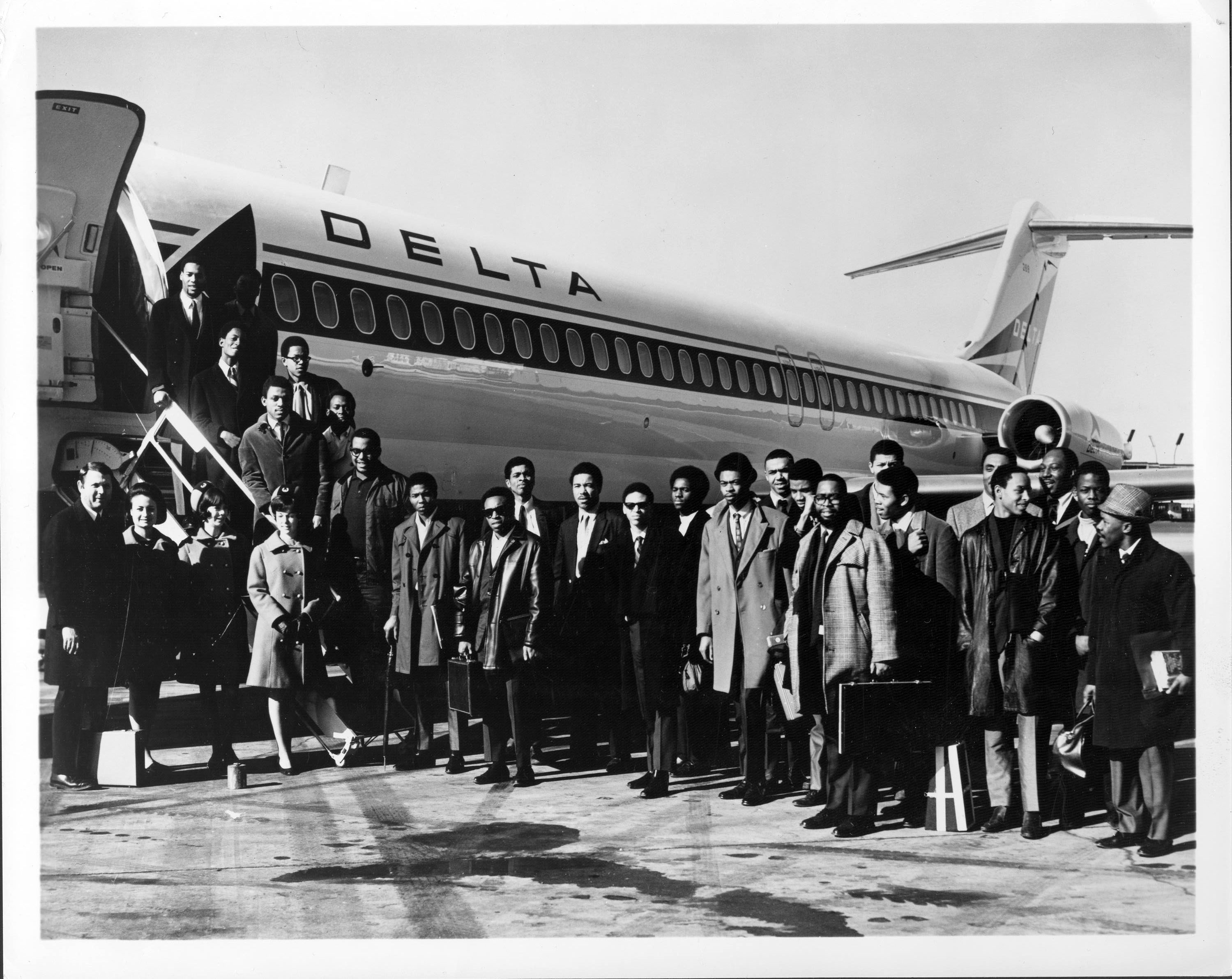 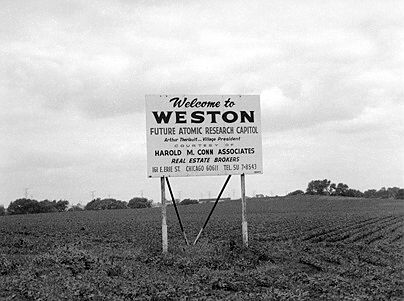 Weston, Illinois was selected as the site for the new National Accelerator Laboratory in 1966. Photo: Fermilab (2 of 2)