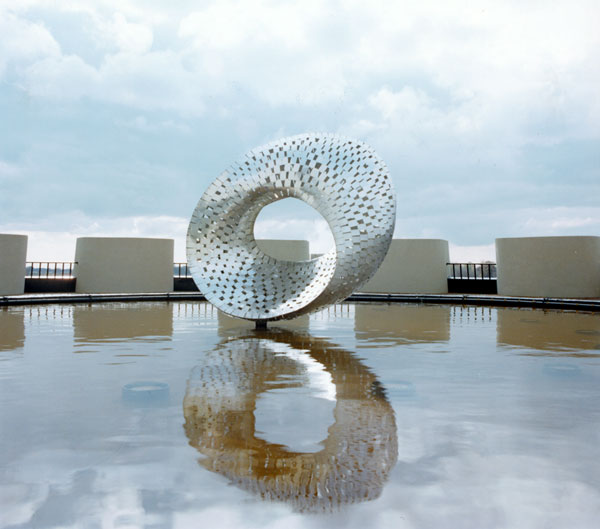 The Mobius Strip is mounted in the midst of a circular pool atop Ramsey Auditorium. It is made of 3 x 5 inch pieces of stainless steel which were welded on a tubular form eight feet in diameter. This sculpture was dedicated in May, 1974. You can learn more about it here.

In the 1970s a fountain encircled the sculpture. You can see an image of the fountain here in the "Site and Natural History" section. 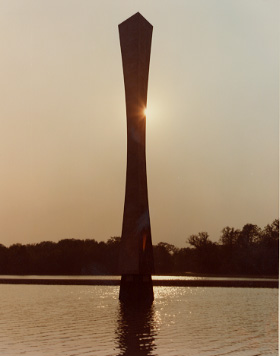 Perhaps the most well known of Wilson's sculptures is the Hyperbolic Obelisk which stands at the foot of the reflecting pond in front of Wilson Hall. It is thirty-two feet high, fabricated of three stainless steel plates each one-quarter inch thick. The Obelisk was erected in May, 1978.

You can learn more about the Obelisk here and view a slideshow of its construction here. 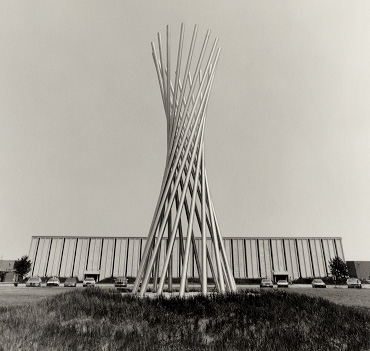 Tractricious, designed by Wilson and Tom Nicol and constructed by members of the Technical Support Section, Louis Ramirez, John Konc, and Kerry Ewald, stands in front of the Industrial Complex. The structure is comprised of 16 stainless steel outer tubes, made from scrap cryostat tubes from Tevatron magnets, and 16 inner pipes from old well casings. Each tube is free standing and designed to withstand winds up to 80 mph. Tractricious was erected in June, 1988.

You can learn more about Tractricious here. 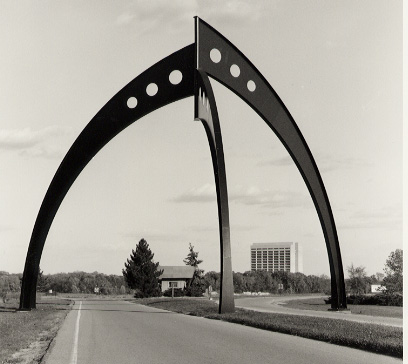 Broken Symmetry straddles the Pine Street entrance to Fermilab. This three-span arch, painted black on one side and orange on the other, appears perfectly symmetrical when viewed directly from below, but has carefully calculated asymmetry from its other views. Broken Symmetry was installed in June, 1978.

You can learn more about Broken Symmetry here. 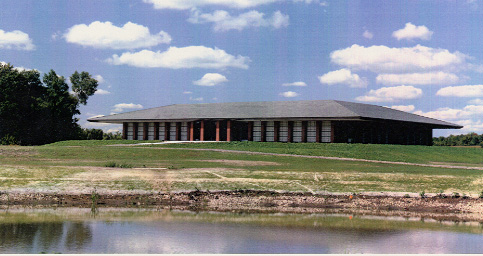 In the early 1990's, Wilson drew upon Frank Lloyd Wright's Prairie school of architecture for the design of the building for the Leon M. Lederman Science Education Center. (5 of 10) 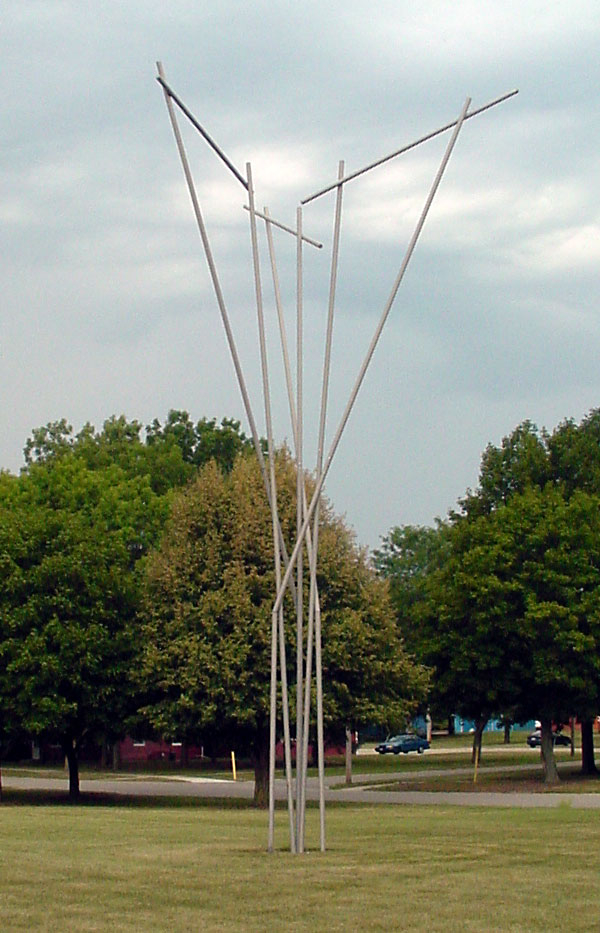 Wilson designed the sculpture called Tree. He created it with Fermilab welders Roger Hiller, Pete Surman, Don Ziobro, and Leo Koziol around 1970. It is located close to the Users' Center. (6 of 10) 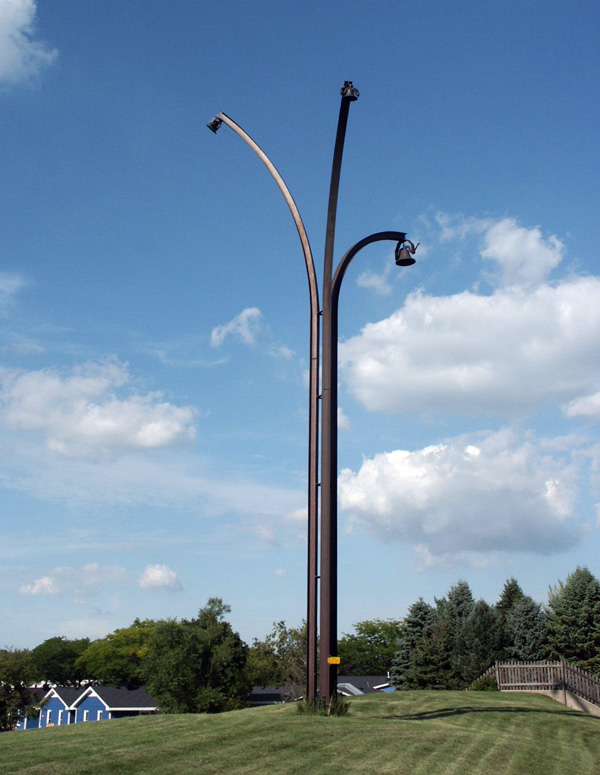 The Bell Tower is located in the Village on Shabbona Street, next to the Children's Center. It was constructed in 1969. Photo by Nadezhda Shemyakina, August 31, 2004. (7 of 10) 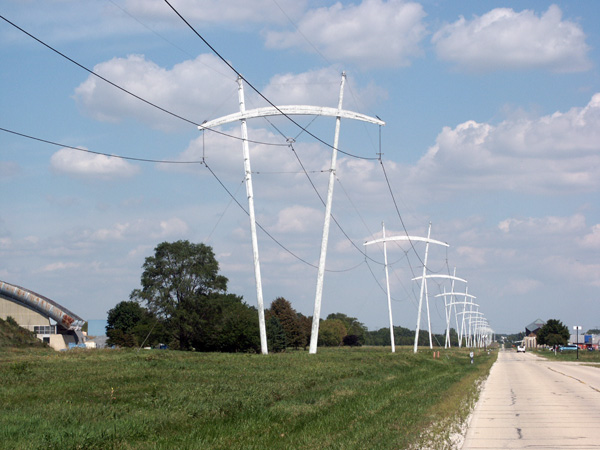 These power poles were designed by Wilson in a unique "H" shape and erected in 1970. In later years, many people would see a resemblance between the power poles and the Greek letter "pi." In 2007, the wooden poles were replaced by steel ones of a similar design. You can learn more about these power poles here, here, and here. (8 of 10) 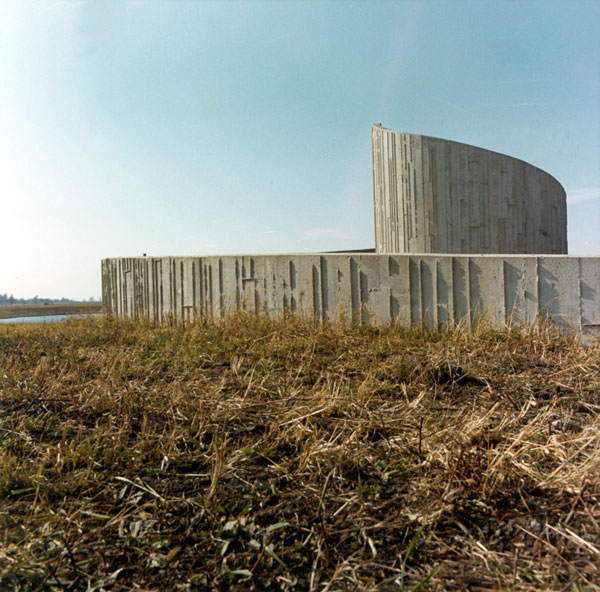 The Archimedes Spiral. You can learn more about it here (9 of 10) 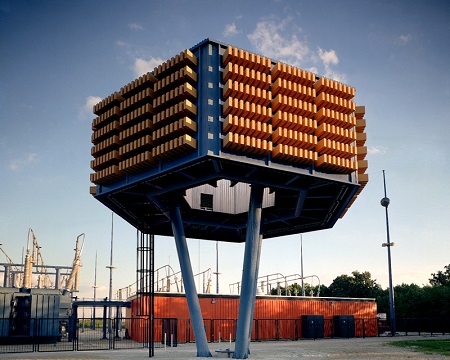 The Capacitor Tree began operating around 1976. It was no longer used after about 1982, and in 1989 it was restored to its original appearance. It was removed in 2016 to make way for upgrades to the Master Substation. You can learn more about it here. (10 of 10)